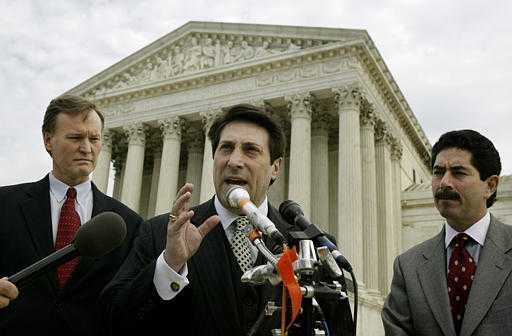 Jay Sekulow, chief counsel for the American Center for Law and Justice, is one of the country’s leading Supreme Court litigators. He has argued numerous First Amendment cases before the high court. In this photo, Sekulow, center, gestures during a news conference outside the Supreme Court on Tuesday, March 2, 2004 in Washington. Sekulow is arguing for the 1998 Child Online Protection Act that would make it a crime for commercial Web sites to knowingly place material that is "harmful to minors" within their unrestricted reach. (AP Photo/Evan Vucci, used with permission from the Associated Press)

Born in Brooklyn, New York, Sekulow earned undergraduate and law degrees from Mercer University and a Ph.D. from Regent University. He converted from Judaism to Christianity in 1974, after taking a religious course as an undergraduate. He began his legal career in Atlanta, working on business ventures, which did not fare well. He rebounded as a Christian evangical attorney.

In 1990 Sekulow became legal director of the American Center for Law and Justice, an organization founded by Pat Robertson in part to combat what Robertson viewed as the liberalism of the American Civil Liberties Union. From that position, Sekulow rose to the top of the legal profession. He won important victories in the Supreme Court in Mergens, which provided for Christian clubs to meet on high school campuses that permitted noncurricular secular groups to meet, and Lamb’s Chapel, which provided that religious organizations should, like secular groups, be able to use public school facilities after hours. Time magazine named him one of the 25 most influential evangelicals in America, and the National Law Journal has listed him among the nation’s 100 most influential lawyers.

In addition to litigation, Sekulow has published numerous books, including Witnessing Their Faith: Religious Influence on Supreme Court Justices and Their Opinions (2006) and The Christian, The Court, and The Constitution (2000). He also hosts a popular radio show, Jay Sekulow Live.