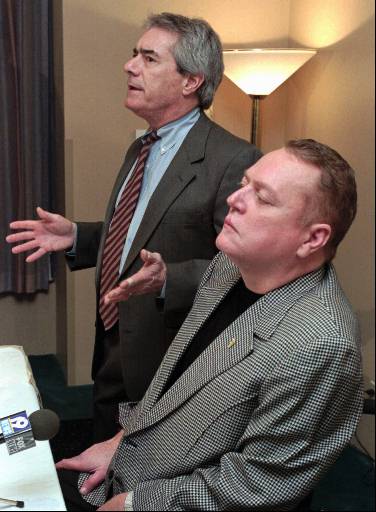 Louis Sirkin speaks during a news conference on Wedenesday, Feb. 18, 1998, beside Hustler magazine publisher Larry Flynt, who has been indicted by a Hamilton County grand jury for selling obscene material at the Hustler magazine store in Cincinnati. Sirkin is known for his First Amendment defense in obscenity and adult entertainment cases.  (AP Photo/Al Behrman, used with permission from the Associated Press)

H. Louis Sirkin (1940– ), a Cincinnati-based attorney, is nationally known for his First Amendment work defending free expression. During his career he has defended various clients in obscenity and adult entertainment cases, among them Larry Flynt, publisher of Hustler magazine. Born in Cincinnati, Ohio, Sirkin earned undergraduate and law degrees from the University of Cincinnati.

Sirkin is known for his success in obscenity cases

After entering private practice, he quickly earned a reputation as an effective civil rights lawyer. He achieved national prominence in 1990, when he successfully defended Dennis Barrie, director of the Contemporary Arts Center in Cincinnati, for displaying the artwork of Robert Mapplethorpe, which some government officials thought obscene. Sirkin earned an acquittal for the defendant from a jury in the Hamilton County Court. The controversy was later made into a movie, Dirty Pictures (2000).

He successfully argued Ashcroft v. Free Speech Coalition (2002) before the Supreme Court. In that decision, the Court invalidated parts of the Child Pornography Prevention Act of 1996 that criminalized “virtual” child pornography as unconstitutionally overbroad. The Court ruled 6-3 that the measure, which punished distributors and possessors of material that did involve actual minors, but only gave the impression of showing minors participating in sexually explicit conduct, “prohibits speech that records no crime and creates no victims by its production.”

Sirkin practices with the Cincinnati-based law firm of Santen & Hughes. He remains active in First Amendment litigation. He convinced the Kentucky Supreme Court to invalidate a city ordinance prohibiting all forms of touching by patrons and performers in adult clubs in Blue Movies, Inc. v. Louisville/Jefferson County Metro Gov't (Ken. 2010).

He remains an active member of the First Amendment Lawyers Association and teaches a class on habeas corpus law at the University of Cincinnati College of Law.