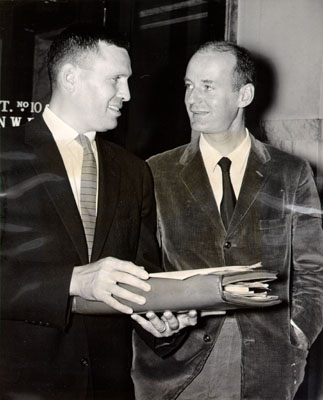 Attorney Lawrence Speiser (on the right) with his client book store owner and activist Lawrence Ferlinghetti on June 11, 1957. Speiser later became the Washington director for the ACLU. He may be the only person who has successfully represented himself before the Supreme Court in a First Amendment case. (Photo via San Francisco History Center, San Francisco Public Library, used with permission)

Lawrence Speiser (1923–1991) may be the only person who has successfully represented himself before the Supreme Court in a First Amendment case.

In Speiser v. Randall (1958), the Supreme Court struck down a provision of the California constitution that denied a property-tax exemption to veterans who refused to sign a loyalty oath. Speiser, who represented himself and another veteran, Daniel Prince, argued the case before the high court and achieved a 7-1 victory.

He began working as staff counsel for the American Civil Liberties Union (ACLU) in Northern California in 1952 and also worked as a private practitioner in San Francisco. In 1959 Speiser became the Washington director of the ACLU.

During his ACLU tenure, he represented several individuals who were called to testify before the House Un-American Activities Committee for their alleged ties to the Communist Party.

Speiser also appeared before the Supreme Court in Torcaso v. Watkins (1961), in which he successfully challenged a provision in the Maryland constitution that required officeholders to declare their belief in God. The Court ruled that the “Maryland religious test for public office unconstitutionally invade[d] . . . freedom of belief and religion.”

Speiser left the ACLU in 1970 to work for the Senate Judiciary Subcommittee on Juvenile Delinquency. He then returned to private practice, handling many employment discrimination cases.