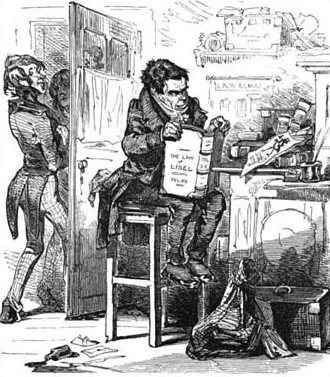 William Benbow, a British pamphleteer and member of the English Chartist movement, is best remembered for his efforts to organize smaller trade unions into a national organization and as a champion of the free press. He was convicted three times of seditious libel for his writings critical of the government. In this cartoon, he is caricatured in Punch magazine in 1848.(Image via Wikimedia Commons, public domain)

William Benbow (1784–1864), a pamphleteer and public orator, was a member of the English Chartist movement. A shoemaker by trade, he is best remembered as the author of the pamphlet Grand National Holiday and as a champion of press freedoms.

Details of Benbow’s early life are unclear, with some sources stating that he was from Manchester and others Lancashire. Some sources also label him as a pornographer, but that moniker likely stems from his publications against church and state, which were called a threat to public morality.

Benbow imprisoned for seditious libel for his support of controversial issues

In 1817 Benbow took over publication of the Political Register for his friend William Cobbett, who had fled London for the United States to avoid imprisonment for seditious libel. It was through his connection with this publication that Benbow became known for his support of universal suffrage, annual election of Parliament, and secret ballots. For his actions, Benbow was arrested and convicted for committing seditious libel, and he spent some 18 months in London’s Cold Bath Fields Prison.

Upon his release, Benbow resumed working on behalf of Cobbett and published a series of pamphlets entitled Crimes of the Clergy, which resulted in a second imprisonment for seditious libel.

After his second release from prison, he became involved in organizing the National Union of the Working Classes, where he met two other radical publishers, James Watson and Henry Hetherington, as well as Richard Carlile, owner of the Rotunda, a speaking venue in Blackfriar’s Road. It is through his association with these three men that Benbow is tied as a devotee of Robert Owen, the Welsh utopian thinker and social reformer, but no record remains as to whether Benbow himself endorsed those utopian views.

In 1832 Grand National Holiday was published as part of a larger effort to organize small trade unions into a larger national organization. The pamphlet introduced the concept of a national general strike. Benbow argued that workers should put aside goods and money so that they could stop working for an entire month in order to hold public meetings to demand government reforms.

Ten years would pass before Benbow would gain enough support to put his idea into action. Meanwhile, Benbow, together with Watson, Hetherington, John Cleave (another radical publisher), and others, refused to pay the stamp-duty tax on their newspapers, which would have put the papers beyond the ability of most working-class people to purchase. As part of this campaign, Benbow published the pamphlet Censorship Exposed in 1837.

By this time, Benbow was arguing openly for direct confrontation with government power and using force if necessary to defend the rights to assemble and a free press. The influence of fellow Chartist Thomas Spence was apparently responsible for this evolution toward force.

With the blessing of the Chartist National Convention of 1839, Benbow began a speaking tour to organize his grand national holiday (strike) for August 1839. But the strike was called off in late July when Benbow was arrested.

At his trial in Chester for sedition, Benbow gave an impassioned speech that lasted more than 10 hours, but he was found guilty nevertheless and served two years in prison. In 1853, Benbow emigrated to Australia where he campaigned for electoral reform and died in Sydney on February 24, 1864.