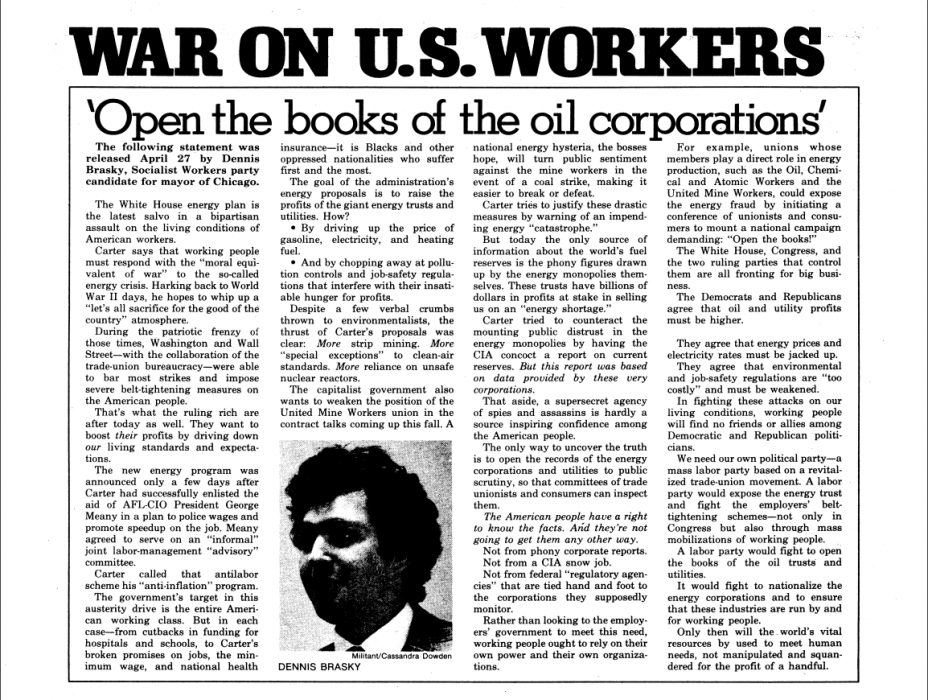 A statement by Dennis Brasky in the May 6, 1977, issue of the Militant, the newspaper for the Socialist Workers Party. Brasky was a candidate for mayor of Chicago in the 1977 election. In order to get Brasky on the ballot in Chicago, the SWP had to gain more signatures than if Brasky had been running for state office. The SWP sued the Illinois State Board of Elections, saying that the higher petition requirement violated equal protection clause of the Fourteenth Amendment. The Supreme Court struck down the law. (The Militant, May 6, 1977.)

The Supreme Court decision in Illinois State Board of Elections v. Socialist Workers Party, 440 U.S. 173 (1979), struck down an Illinois law requiring independent candidates and new political parties to obtain more petition signatures to qualify for the Chicago ballot than for a statewide office. It therefore affirmed other decisions tying third-party ballot access to the freedom of association that the Court has associated with the First Amendment.

Illinois required parties receiving less than 5 percent of the vote in the previous election for the particular office, and independent candidates seeking statewide offices, to file petitions with the signatures of at least 25,000 qualified voters. However, the petition requirement for smaller political areas, such as cities or counties, was 5 percent of the qualified voters.

Because of the large population of Chicago, the Socialist Workers Party (SWP) had to file petitions with nearly 36,000 signatures to have its candidate for mayor on the ballot in the 1977 special election. The SWP and two voters had sued the Illinois State Board of Elections, claiming that the higher petition requirement for the Chicago election violated the equal protection clause.

State Board of Elections claimed case had already been decided

The board argued that the decision in an earlier case attacking Illinois’ 5 percent requirement should bar the SWP from attacking the rule. The earlier case, Jackson v. Ogilvie (1971), had been decided without an opinion on the same day the Court upheld Georgia’s 5 percent petition requirement in Jenness v. Fortson (1971).

However, the district and appellate courts had granted the injunction sought by the SWP, and the Illinois Board sought Supreme Court review.

Court said state had no compelling interest for law

When restricting the rights of voters to express their preferences for candidates, Marshall wrote, the state must establish that its classification serves a compelling state interest and is the least restrictive means of protecting that interest. The state Board of Elections had advanced no justification for the difference except pointing out that the legislature had required a geographical spread of the petition signatures in statewide races. Federal courts had struck down the 5 percent rule already.

Marshall concluded, “Historical accident, without more, cannot constitute a compelling state interest.” The Court held that Illinois could not require independent candidates and new parties to obtain more petition signatures in Chicago than in the whole state.

Other justices disagreed with opinion while agreeing with result

Four members of the Court wrote three opinions in which they concurred in the result but disagreed with the majority opinion. Chief Justice Warren E. Burger joined by Justice Harry A. Blackmun complained about the use of “convenient and result oriented” phrases such as “compelling state interest” and “least drastic means” but agreed that the outcome of the case was correct.

This article was originally published in 2009. Edward Still has practiced in Alabama and Washington, D.C., since 1971. He has brought numerous First Amendment, due process, and equal protection suits for a variety of people:  public employees, playwrights, religious and political minorities, and even truckers over state regulation of bumper stickers.