By Alvin K. Benson
Other articles in Publishers or Subjects of Attempted Censorship 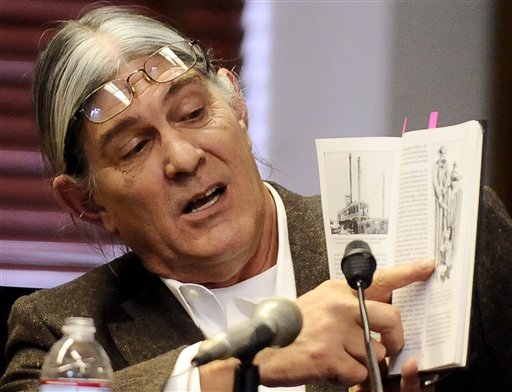 Ward Churchill points to an essay he wrote during his testimony in 2009 in his civil suit alleging he was wrongfully terminated by the University of Colorado because of his political views. Churchill had become the center of national controversy after writing an essay that asserted that U.S. foreign policies had incited the terrorist attacks of Sept. 11, 2001. Many defended his First Amendment academic freedom to express his views. More than a year later, he was accused of various charges, including plagiarism, and was dismissed. (AP Photo/Mark Leffingwell, Pool, used with permission from the Associated Press)

Ward LeRoy Churchill, a professor of ethnic studies at the University of Colorado, Boulder, became the center of national controversy after writing an essay arguing that U.S. foreign policies had incited al-Qaida’s attack of September 11, 2001.

Churchill asserted that when U.S. foreign policy causes death and destruction abroad, retaliation will follow. He also argued that like the Pentagon, the World Trade Center was a military target and that the 2,997 people killed there were not innocent victims, but “little Eichmanns” — a reference to one of Hitler’s high-ranking subordinates — who formed a technocratic corps at the center of the U.S. global financial empire.

Many people were appalled by some of Churchill’s comments.

Colorado governor Bill Owens and a number of other influential individuals demanded his resignation from the university, noting that although Churchill could freely express his ideas, his First Amendment rights did not guarantee financial support from public funds for himself or his ideas.

After widespread criticism in the mass media, Churchill resigned as chair of his department in January 2005 but retained his status as a tenured professor.

In June 2006, a university committee investigated allegations that Churchill had committed breaches of academic misconduct and recommended his firing. Critics of the university’s actions alleged that the charges, which included plagiarism, would never have been brought had Churchill not become a controversial figure. Two weeks later, the university announced Churchill’s dismissal.

Churchill challenged the decision, claiming he was dismissed for his political views. But the Colorado Supreme Court in September 2012 upheld two lower courts, saying the Board of Regents were legally protected in their decision to terminate Ward for academic misconduct.