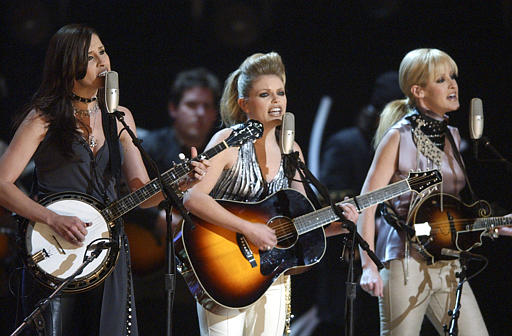 Through controversial political comments, the Dixie Chicks — a popular, progressive bluegrass music trio — became a symbol of the U.S. political and cultural polarization and the First Amendment’s protection of free speech. In this photo, the Dixie Chicks, from left, Emily Robison, Natalie Maines and Martie Maguire perform the song "Landslide" at the 45th Annual Grammy Awards, Sunday, Feb. 23, 2003, at Madison Square Garden in New York. (AP Photo/Mark Lennihan, used with permission from the Associated Press)

Through controversial political comments, the Dixie Chicks — a popular, progressive bluegrass music trio — became a symbol of the U.S. political and cultural polarization and the First Amendment’s protection of free speech.

The group, composed of singer Natalie Maines and multi-instrumentalist sisters Emily Robison and Martie Maguire, originates from Texas. Onstage at the 2,000-seat Shepherd’s Bush Empire theater in London, England, on March 10, 2003, Maines said, “Just so you know, we’re ashamed the president of the United States is from Texas.” Quoted in Betty Clarke’s review of the show in The Guardian, word of the statement traveled home rapidly.

Perceived as a criticism of President George W. Bush’s policies, primarily the decision to go to war in Iraq, the statement and the Dixie Chicks were roundly criticized by the mainstream country music industry. Many fans took great offense at Maines’s comments and at the support provided to her by her bandmates. A few suggested her words were an act of treason.

While many people found her words strongly objectionable, if not offensive, the singer broke no laws, and the controversy revolved around the boundaries of free speech. The outrage directed toward the group in the wake of Maines’s 10-word statement was from other U.S. citizens exercising the same right to free speech. The vigor of this discussion, short of making credible threats, points out the importance of maintaining protection for unpopular speech.

The uproar, however, did not limit itself to words. Boycotts of the Dixie Chicks’ American tour were announced. Country radio stations, including all outlets of the Cumulus Broadcasting Company, removed the group from their play lists. During a demonstration protesting the singer’s statement, protesters publicly destroyed copies of the Dixie Chicks’ recordings. Many in the audience of the Academy of Country Music awards that May booed when the group’s name was read as a nominee.

In 2004 the Dixie Chicks played several dates on the Vote for Change tour, organized to raise money and encourage people to vote for Bush’s opponent for reelection, John Kerry. A documentary film, Dixie Chicks: Shut Up and Sing, detailing the controversy and how the group dealt with its aftermath, was screened at the 2006 Toronto International Film Festival and was released on DVD in 2007.

At the National Academy of Recording Arts and Sciences Grammy Awards in 2007, the group won all five of the awards for which it was nominated, including Song, Record, and Album of the year for the album Taking the Long Way and its single “Not Ready to Make Nice,” which referred directly to their experiences of the preceding three years.

Country radio continues to ostracize the Dixie Chicks, but the group clearly retains the support of the larger music industry, as well as fans. The Dixie Chicks continue to sell millions of discs and appear content to continue their careers without compromising the integrity of their artistic and individual expressions.

This article was originally published in 2009. Paul Fischer, PhD, served on the faculty of Middle Tennessee State University's Department of Recording Industry from 1996 to 2018. He is considered a pioneer in the field of Popular Music Studies.