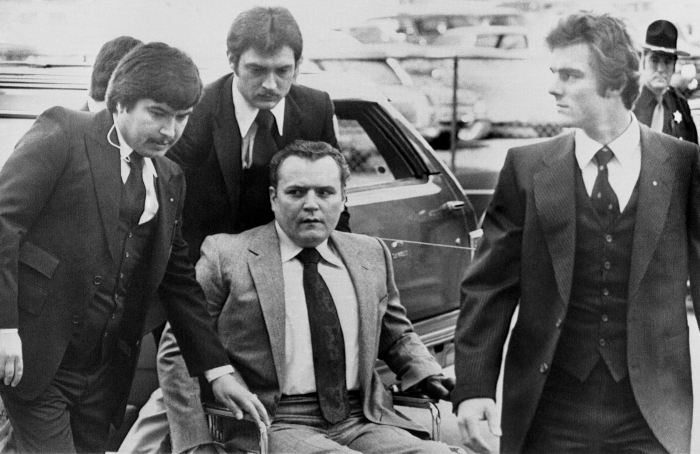 In this photo, Hustler magazine publisher Larry Flynt is surrounded by heavy security as he arrives at the Fulton County Courthouse in Atlanta, 1979, for the start of his trial on obscenity charges. Flynt published the pornographic magazine Hustler and was involved in multiple First Amendment cases that tested obscenity laws. (AP Photo/Steve Helber, used with permission from the Associated Press)

Flynt was born in Magoffin County, Kentucky, an impoverished area deep in coal country. There, he had an unsettled childhood. His father, an alcoholic bootlegger, separated from his wife in 1953. To enter the army, Flynt lied about his age. Shortly after his release, he enlisted in the navy, where he became a radar operator. By 22, he had retired as a sailor, had been twice divorced, and was working as a dishwasher. He opened a bar in Dayton, Ohio, in 1968.

By 1973 Flynt had a chain of eight Hustler Clubs, where patrons watched women in bikinis dance in cages.

In July 1974, he began publishing his trademark publication, Hustler, which was followed by Beaver Hunt and Barely Legal.

Sexually more explicit than Playboy, Hustler featured gynecological photographs, as well as pictures of naked women trussed like turkeys and a girl being fed headfirst into a mincer.

Flynt viewed such images as parody that qualified as protected speech, although he admittedly had little interest in the principles of the First Amendment before prosecutors began to bring obscenity charges against him, initiating Flynt’s ongoing battle to test the nation’s obscenity laws.

In his first major trial in Cincinnati in 1977, Flynt was championed by celebrities who took out an advertisement in the New York Times that likened his situation to that of a Soviet dissident.

He was fighting another charge in a Georgia courthouse in 1978 when he was ambushed and shot, allegedly for publishing explicit photographs of a mixed-race couple. One bullet shattered Flynt’s spine and left him in constant pain.

Flynt, who proudly refers to himself as a “smut peddler,” spent millions on legal fees in the decades he ran Hustler. His most famous legal case involved Jerry Falwell, founder of the right-wing group Moral Majority.

In 1983, Hustler ran a liquor advertisement parody suggesting that Falwell had lost his virginity to his mother in an outhouse. Falwell sued, saying he suffered emotional distress.

In Hustler Magazine v. Falwell (1988), the Supreme Court invalidated a lower court’s $200,000 damage award and ruled that a public figure cannot recover damages stemming from a satirical attack. The decision demonstrated that the adult entertainment industry is frequently in the vanguard of First Amendment free speech court battles that affect the wider culture. Flynt has also spent much of his time and fortune on exposing hypocrisy among the guardians of public morals.

During the period leading up to the 1998 impeachment attempt against President Bill Clinton for having an extra-marital affair with a White House intern, Flynt offered $1 million to women who would testify to sexual encounters with members of Congress.

This tactic eventually brought about the downfall of Robert L. Livingston, a Republican representative from Louisiana and Speaker-elect of the House of Representatives, who confessed to adulterous affairs and resigned from the House.

More recently, in 2004, Flynt unsuccessfully challenged the Department of Defense’s policy on media access to combat troops (Flynt v. Rumsfeld). Flynt became a cultural icon of sorts after the release in 1996 of the popular movie The People v. Larry Flynt, starring Woody Harrelson as the famous pornographer.