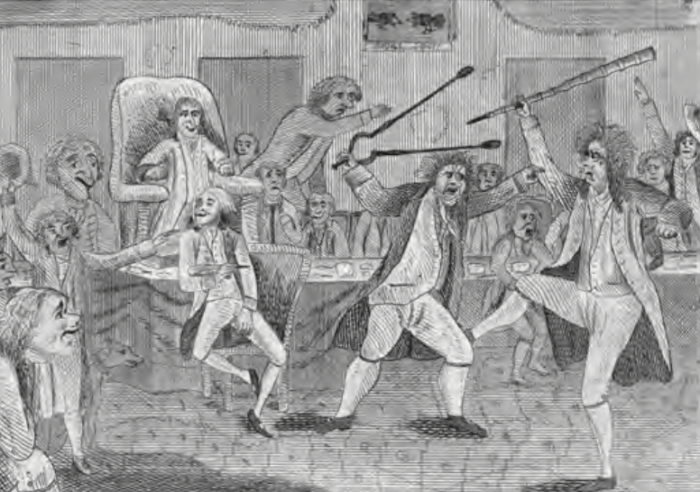 This 1798 paper etching portrays the fight on the floor of Congress between Reps. Matthew Lyon of Vermont (holding fireplace tongs) and Roger Griswold of Connecticut (holding cane). After being imprisoned for violating the Sedition Act, Lyon won landslide reelection to the House of Representatives.

Lyon was involved in the early American military and government

Born on July 14, 1749, in Wicklow County, Ireland, Lyon was apprenticed to a printer and then sailed for America in 1764 as an indentured servant. By 1772, he had acquired a sufficient income to buy land in Cornwall, Connecticut. He later moved to the frontier region between New York and New Hampshire.

During the American Revolutionary War, Lyon served as a colonel in the Green Mountain Boys and played an important part in the capture of Fort Ticonderoga in 1775. After the signing of the Declaration of Independence, he joined the Continental Army and served as a second lieutenant under General George Washington. When Vermont declared its independence from New York and became a state in 1776, Lyon became a member of revolutionary Vermont’s government. After the war, he settled down with his family and became a prosperous businessman.

Lyon was charged with acting in opposition to the President

Lyon won a seat in the U.S. House of Representatives in 1796. A symbol of frontier democracy, Lyon warned his constituents of the pro-British sympathies of the Federalists. He aimed most of his attacks at President John Adams and wrote a series of public letters that attacked Adams for seeking power, thirsting for pomp and adulation, demonstrating avarice, and dismissing meritorious men from office because of their independence of thought.

Vermont Federalists charged Lyon with being criminally guilty of acting in opposition to the President. They alleged that he had Jacobinic (or French Revolutionary) principles. On October 6, 1798, Lyon was arrested. The warrant charged that he was “a malicious and seditious person, and of a depraved mind and a wicked and diabolical disposition.”

Lyon had difficulty finding an attorney and settled for an old rival who was running against him in the current election. In fact, Lyon acted as his own attorney during the trial that began on October 9. He cross-examined witnesses and pleaded his own defense. Lyon argued the general Republican position that the seditious libel laws were the exclusive province of state legislation. He challenged the constitutionality of the Sedition Act on the grounds that it violated the First Amendment’s protection of freedom of speech.

Lyon was sentenced to imprisonment

Although the records of the case are spotty, one of the judges reasoned that the government must defend itself without appealing to a state and that Lyon’s offense was against the United States. The humorous highlight of the trial came when Lyon called witnesses to prove that Adams dined in luxury, demonstrating that the definition of simplicity meant one thing to a frontiersman like Lyon and another to the eminent judge that he examined. The jury deliberated for an hour before finding Lyon guilty. The judge sentenced him to four months’ imprisonment and to further confinement until he had paid the costs of the prosecution and a fine of $1,000.

Lyon was re-elected to Congress in prison

Instead of silencing Lyon, prison made a martyr of him. After forcing Lyon to take a circuitous route to the jail in order to display him triumphantly before the town citizens, the marshal assigned Lyon to a common cell that he shared with many other inmates. (One of Lyon’s judges was imprisoned for debt during Lyon’s term of imprisonment and was given a room of his own in the same jail.) The people of western Vermont responded to all of this by giving Lyon a landslide victory in his reelection campaign. The Vermonters also petitioned Adams to pardon Lyon and remit his fine, to no avail.

When Lyon left jail, he returned to Congress, where, helping to resolve the presidential election of 1800, he cast the tie-breaking vote for Thomas Jefferson over Aaron Burr. Lyon’s imprisonment had made civil liberties one of the major campaign issues of the election. His jailing illustrated the extent to which the Federalists were stifling the right to dissent. Jefferson’s victory gave him some vindication. Lyon moved to Kentucky in 1800 and continued to serve in the House until 1811. He died on August 1, 1822.