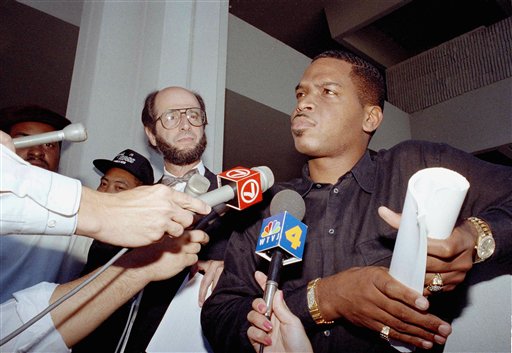 Luther Campbell, leader of hip hop group of 2 Live Crew, right, holds a copy of a federal judge's order ruling his best-selling album to be obscene, outside of the federal courthouse in Fort Lauderdale, Fla., June 6, 1990. The judge said the album, "As Nasty As They Wanna Be", "is an appeal to dirty thoughts...not to the intellect and the mind." Bruce Rogow, Campbell's attorney is at left. A circuit court later said the album wasn't obscene. (AP Photo/Bill Cooke, used with permission from The Associated Press.)

The Florida-based “party rap” group 2 Live Crew holds the distinction of releasing the first sound recording to be declared obscene.

The 1989 album As Nasty As They Wanna Be was released with an “Explicit Lyrics” advisory sticker, but was nonetheless investigated by the Broward County (Florida) Sheriff’s Office beginning in February 1990. The resulting case made it all the way to the Supreme Court.

After obtaining a copy of the recording and transcribing its lyrics, Deputy Sheriff Mark Wichner prepared an affidavit requesting that Broward County Court find probable cause for obscenity. In March, Judge Mel Grossman issued such an order. Wichner copied the order and visited three retail stores in a jacket marked “Broward County Sheriff” and with his badge in plain view, warning “as a matter of courtesy” that future sales would result in arrest. Other officers visited between 15 and 20 other stores.

A week later, Skyywalker Records, Inc. filed suit on behalf of 2 Live Crew in federal district court to determine whether the actions of the sheriff’s department constituted an illegal prior restraint and whether the recording was obscene. Judge Jose Gonzalez found in Skyywalker v. Navarro (S.D. Fla. 1990) that there was an illegal prior restraint and that the recording was indeed obscene. Gonzalez cited Miller v. California (1973) as the controlling case and referred to Kaplan v. California (1973) as precedent for finding obscenity in nonpictorial matters.

In May 1992, the 11th U.S. Circuit Court of Appeals reversed Gonzalez’s ruling in Luke Records v. Navarro. (The name of the record label was changed after the filmmaker George Lucas sued 2 Live Crew leader Luther Campbell over the use of “Skyywalker.”) The appeals court based its decision on the fact that the state did not counter arguments that although graphic, the music had artistic value. Florida authorities appealed to the Supreme Court but were denied certiorari in Navarro v. Luke Records (1992), leaving the circuit court ruling in force.

Campbell was also party to the Supreme Court case Campbell v. Acuff-Rose Music, Inc. (1994) because of his sampling of recognizable portions of Roy Orbison’s “Oh, Pretty Woman” in a 2 Live Crew recording. Because the Court viewed Campbell’s work as parody, his action was found to be “fair use” instead of copyright infringement.

Most musical expression is safe from obscenity charges

Although courts have exonerated 2 Live Crew’s songs of obscenity, many people still find their profane and sexually explicit content to be patently offensive. Music lyrics are rarely as thoroughly or explicitly sexual as Nasty. If this recording is not obscene, it is safe to say that the vast bulk of nonpictorial musical expression is secure on these grounds. Music has long been acknowledged as a medium having social, artistic, and at times political value. Popular music lyrics, even if reviled, are presumed to be protected speech in the United States.