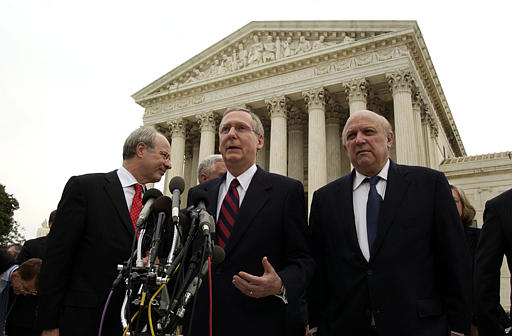 Sen. Mitch McConnell, R-Ky., center, is flanked by his legal counsel Jon Baran, left, and Floyd Abrams, right, as he speaks to media outside the U.S. Supreme Court in 2003. The Court heard arguments regarding McConnell's challenge to campaign finance reform laws in the case McConnell v. Federal Election Commission (2003). The Court upheld the major provisions of the McCain–Feingold campaign finance law, officially known as the Bipartisan Campaign Reform Act of 2002. This finding rejected opponents’ claims that the act stifled First Amendment rights of free speech and association. (AP Photo/Gerald Herbert, used with permission from the Associated Press)

The dangers of the amassed wealth and improper use of stockholder and union member moneys have long concerned reformers. However, laws restricting the political activities of corporations were not passed until the Progressive era, and restrictions were not placed on labor unions until World War II. The Watergate scandal that afflicted President Richard Nixon’s administration gave rise to the next wave of significant reforms. Congress required fuller disclosure of and imposed limits on campaign contributions and expenditures in the 1974 amendments to the Federal Election Campaign Act (FECA).

The Supreme Court struck down many of FECA’s key provisions in Buckley v. Valeo (1976). Although upholding the cap on campaign contributions on the grounds that it served a “compelling governmental interest” in “limiting the actuality or the appearance of corruption,” the Court held that limits on independent expenditures unconstitutionally burdened the right to political speech. The Court also narrowed the disclosure rules so that only political advertisements that used expressed words of advocacy (so-called “magic words” such as “vote for” or “vote against”) were regulated.

Candidates and organized interests soon exploited loopholes in the contribution and disclosure laws. Continuing public concern about the potentially corrupting influence of money on elections prompted Congress to try to reimpose meaningful contribution limits and disclosure rules. However, only after Congress was energized by allegations of favoritism toward soft money donors during the Clinton and Bush administrations did it enact BCRA in March 2002.

BCRA prohibited the national, state, and local political parties from using soft money to affect federal elections. All funds used must be heavily regulated “hard money,” complying with federal election restrictions on contributions and requirements for disclosure. The law also prohibited corporations, unions, and individuals from using their own funds to pay for election-related broadcast radio or television commercials that target candidates for federal office 30 days before a primary or 60 days before a general election. It eliminated Buckley’s distinction between campaign (“Vote for Smith”) and issue advocacy (“Smith is soft on terrorism”) commercials. Stricter disclosure rules about who funded the permitted commercials were imposed.

Sen. Mitch McConnell (R-KY), the most prominent congressional opponent to BCRA, and 84 organizations with such diverse political agendas as the American Civil Liberties Union, the Republican National Committee, the California Democratic Party, and the National Rifle Association challenged BCRA within days of its passage. Anticipating such challenges, BCRA contained provisions accelerating lawsuits against it so that its constitutionality could be settled before the 2004 elections. A special three-judge federal court met and issued a 1,638-page ruling. It struck down some of the bans on soft money but upheld the restrictions on political commercials.

The majority ruled that provisions banning soft money and the “sham” issue advocacy commercials were appropriately designed to combat a widespread perception that large contributors exercise undue influence over government. They applied a relaxed “sufficiently important interest” standard, rather than the normal “strict scrutiny” test applied when a First Amendment right is contested, because the BCRA limits only marginally affected core political speech and association.

O’Connor and Stevens did apply the stricter standard to the political advertising provisions because the provisions regulate explicit political expression. Nonetheless, these provisions met the compelling governmental interest requirement because Congress had not banned all commercials, regulating only how such commercials were funded and the disclosure of their sponsors.

Justice Scalia wondered how a court that had recently struck down restrictions on “virtual child pornography . . . tobacco advertising . . . dissemination of illegally intercepted communications . . . and sexually explicit cable programming” could affirm “a law that cuts to the heart of what the First Amendment is meant to protect: the right to criticize the government.”

Justice Thomas once again called for the Court to overrule Buckley and accord political campaign speech greater First Amendment protection.

BCRA did not have a dramatic impact

BCRA’s short-term impact was less dramatic than its supporters had hoped and its opponents had feared. The cost, conduct, and competitiveness of the 2004 election seemed little affected.

It is clear that members of the Court, like the Congress, fundamentally disagree about how a well-functioning democracy should operate. Where the majority saw the potential for corruption in the everyday favoritisms and influence between public officials and interest groups, the dissenters saw it more narrowly focused on the explicit exchange of legislative votes for money.

The change in the Court’s composition with John G. Roberts Jr. as chief justice led to a different outcome in Federal Election Commission v. Wisconsin Right to Life, Inc. (2007), in which the Court invalidated a provision in the BCRA related to corporations’ election ads. Some view this decision as at least a partial reversal of the McConnell v. FEC decision.

The Court reversed itself more completely in Citizens United v. Federal Election Commission (2010). In Citizens United, the Court said "[t]he Government may regulate corporate political speech through disclaimer and disclosure requirements, but it may not suppress that speech altogether" and invalidated the BCRA's provision that prohibited corporations and unions from using their general treasury funds for express advocacy or electioneering communications.

This article was originally published in 2009 and updated in 2019. Timothy J. O'Neill is Emeritus Professor and Holder of the Tower-Hester Chair in Politics at Southwestern University, Georgetown, Texas. He is the author of several articles on the First Amendment, concentrating on religious liberty and church/state relations, as well as teaching constitutional liberty courses for 40 years.