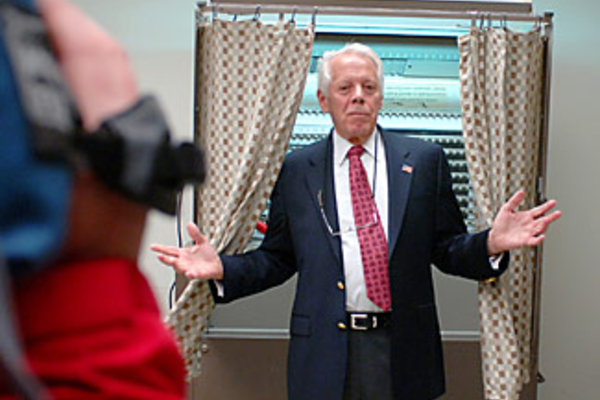 Davis v. Federal Election Commission (2008) struck down part of the Bipartisan Campaign Reform Act of 2002, known as the so-called “Millionaire’s Amendment.” Democratic congressional candidate Jack Davis, who was involved in the case, emerges from the voting booth at the Clarence Senior Center in Clarence, New York, in 2006. (AP Photo/Don Heupel, used with permission from the Associated Press)

It provided that when a candidate running for the U.S. House of Representatives spends $350,000 or more of the candidate’s own money, the opposing candidate would then be able to accept treble the amount from contributors than would otherwise be allowed under federal law.

The provision also required self-financing candidates to meet a number of disclosure requirements.

Jack Davis, an unsuccessful Democratic candidate for New York’s 26th Congressional District in 2004 and 2006, who had exceeded the $350,000 limit in both elections, argued that this provision violated the First Amendment. A three-judge panel of the U.S. District Court for the District of Columbia granted Davis standing but issued a summary judgment on behalf of the Federal Election Commission, which was appealed directly to the Supreme Court.

Although both elections were complete, the Court accepted standing on the basis that Davis had faced the real possibility that his opponent would be permitted to accept higher outside contributions as a result of Davis’s spending, and on the basis that his situation was “capable of repetition, yet [otherwise] evading review” because the election would be too short to litigate it.

On the merits, Alito ruled that prior decisions, like Buckley v. Valeo (1976) and McConnell v. FEC (2003), had accepted the right of government to limit both individual and aggregate limits on individual contributions (other than one’s own) to campaigns as a way of limiting both corruption and the appearance of corruption.

Although the Court had recognized that such limits could be too low, it had not required an upper limit. In this case, however, the law did not raise outside contributions equally but only for House candidates who faced opponents legally spending their own money to finance their campaigns.

Thus, a candidate exercising a right to spend on the candidate’s own campaign faces the choice of limiting contributions or activating “a scheme of discriminatory contribution limits.”

In order to do this, the government must show a “compelling state interest.” The government cannot assert the goal of eliminating corruption or the appearance of corruption, because Buckley ruled that spending personal funds actually reduces such anti-corruption interests.

Similarly, the government’s interest in leveling electoral opportunities for those without great personal wealth is akin to its efforts to limit an individual’s contributions to the individual’s own campaign: “The argument that a candidate’s speech may be restricted in order to ‘level electoral opportunities’ has ominous implications because it would permit Congress to arrogate the voters’ authority to evaluate the strengths or candidates competing for office.”

The government’s claim that the law further ameliorates the effects of tight contribution limits is likewise in conflict with the Buckley decision, which treated expenditures and contributions differently.

Alito also struck down the disclosure requirements in this case because he thought that they were “designed to implement the asymmetrical contribution limits” that the Court found problematic.

Justice John Paul Stevens wrote a separate opinion agreeing that Davis had standing in this case but disputing its decision to strike down part of the law. Stevens agreed with Justice Byron White’s dissent in the Buckley case, wherein White had argued that the Court should treat expenditure limits as time, place, and manner restrictions that were acceptable as long as they served legitimate and substantial interests.

Stevens believed the Court had put too much focus on the quantity of speech and not enough on its quality, which he thought could often be enhanced by campaign limits.

Stevens accepted the Millionaire’s Amendment as a way both to reduce the importance of wealth as a criterion for office and as a way of countering public perceptions that such positions were effectively for sale. He further denied that the law in any way quieted the speech of the candidate who wanted to spend more than $350,000 of the candidate’s own money.

Cases like Austin v. Michigan Chamber of Commerce (1990) had accepted regulation of corporate campaign contributions [the case was subsequently overturned by Citizens United v. FEC (2010)], and “there is no reason” this logic is not “equally applicable in the context of individual wealth.” Congress has the right to prevent disparities in wealth from being translated into disparities in political power.  Stevens further rejected Davis’s Equal Protection arguments that the majority did not address.

Justice Ruth Bader Ginsburg, joined by Justice Stephen Breyer, agreed that Davis had standing but did not view the law as inconsistent with Court precedents. She did not, however, want to join Stevens in questioning Buckley’s distinction between contributions and expenditures because this issue was not briefed in this case.

In Arizona Free Enterprise Club’s Freedom Club PAC v. Bennett (2011), the Court majority used the Davis decision as a precedent for striking down an Arizona law that matched contributions of privately funded candidates by raising the amounts given to those that had accepted public financing.