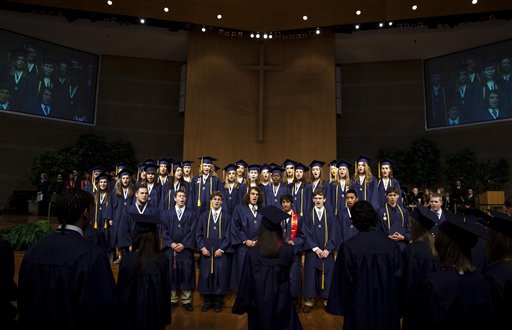 A choir sings at the Brookfield East High School graduation ceremony at Elmbrook Church in 2009 in Wisconsin. A federal judge ruled that the school district may continue to hold its graduation ceremonies in the church because the location doesn't necessarily make it a religious event. However, a circuit court said the location violated the First Amendment's establishment clause. The Supreme Court could not agree to hear an appeal. (AP Photo/Morry Gash, used with permission from the Associted Press)

In Elmbrook School District v. Doe, 573 U.S. ____ (2014), four Supreme Court justices could not agree to accept certiorari in a case in which the 7th U.S. Circuit Court of Appeals had found that a suburban Milwaukee school decision had violated the First Amendment’s establishment clause by holding a high school graduation in a nondenominational church. Justice Antonin Scalia authored a dissent to this denial of certiorari, which Justice Clarence Thomas joined.

Scalia began by explaining that he sympathized with those who found themselves part of a captive audience, but noted that his annoyance did not amount to a constitutional prohibition.

He was concerned, moreover, that the Court was being used by individuals who took umbrage about holding public events in religious facilities despite the fact that “the First Amendment explicitly favors religion.”

Scalia further argued that the Court’s decision in Town of Greece v. Galloway (2014) had repudiated the endorsement test as a way of determining whether there was a violation of the establishment clause.

Scalia thought the graduation did not violate the First Amendment

Scalia further argued that the decision in Town of Greece had established that mere personal offense did not constitute coercion. The 7th Circuit had failed to distinguish the current case from cases like Lee v. Weisman (1992) and Santa Fe Independent School District v. Doe (2000), in which Court majorities had believed “that students were coerced to engage in school-sponsored prayer.”

Scalia emphasized that “the kind of coercion that the Establishment clause condemns was far narrower than the sort of peer-pressure coercion” in these cases.

Scalia further argued that the decision in Town of Greece had relied on historical practices and understandings, which had long permitted public schools to hold special events in churches, and which the Seventh Circuit Court had ignored.

Scalia observed that three judges had dissented from the 7th Circuit’s decision, adding to its “certworthiness.”