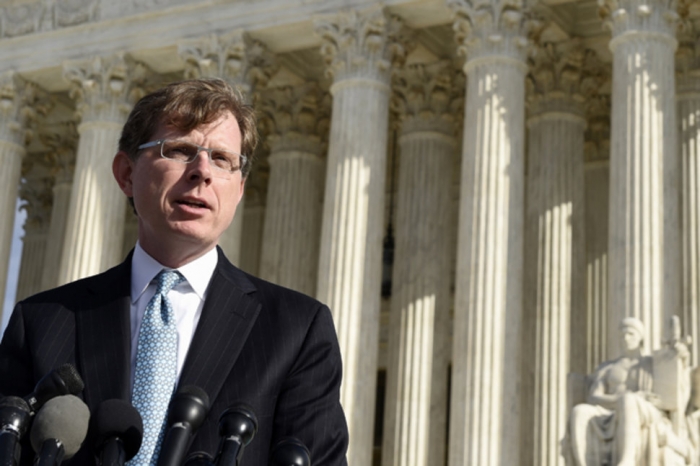 Elonis v. United States (2015) that Anthony Douglas Elonis had been improperly convicted of transmitting threats through postings on Facebook. The First Amendment does not protect true threats. In this photo, John P. Elwood, Elonis's attorney, speaks to reporters outside the Supreme Court in 2014.  (AP Photo/Susan Walsh, used with permission from the Associated Press)

In Elonis v. United States 575 US __ (2015), Chief Justice John G. Roberts, Jr. was joined by six justices who reversed a trial court conviction, which had been upheld by the 3rd U.S. Circuit Court of Appeals. They decided that Anthony Douglas Elonis had been improperly convicted of transmitting threats through postings on Facebook.

Elonis posted lyrics that appeared to be threatening but had disclaimers

Elonis had posted rap lyrics under the name of “Tone Dougie” that appeared to threaten his ex-wife, an FBI agent, and even a kindergarten class.  However, he had included disclaimers indicating that his lyrics were “fictitious,” that they were “therapeutic,” that they emulated the lyrics of rap star Eminem, and that they were a proper exercise of Elonis’ First Amendment rights.

At trial, Elonis requested the judge to instruct the jury that to convict him, the government must prove that he intended to convey a true threat. Instead, the court instructed jurors that they need only find that “a reasonable person” would interpret the words to constitute such a threat.

Although the federal statute (18 USC Sec. 875 (c)) under which Elonis was convicted does not specify an individual’s requisite mental state, the Court has long insisted that “wrongdoing must be conscious to be criminal.” This is because criminal law has always insisted on actual blameworthiness as expressed in such terms as “mens rea, scienter, malice aforethought, guilty knowledge and the like.” A criminal defendant must “know the facts that make his conduct fit the definition of the offense.”

The reasonable person standard that the lower court employed effectively reduces the standard for a criminal conviction to that of negligence, which is more consistent with the standard for civil liability. Hamling v. United States (1974) established that individuals would not necessarily have to know whether materials they distributed were legally obscene to be convicted, but they would have to know “the character of what was sent.”

Although Elonis asserted that recklessness was not sufficient to show that he had uttered a true threat, neither he nor the government briefed this issue, and there were no conflicting circuit court opinions on the subject that the Court might review. The Supreme Court accordingly refused to decide whether a showing of recklessness would prove to be legally sufficient for such a criminal conviction.

In a partial concurrence and a partial dissent, Justice Samuel Alito agreed that the Court appropriately sought to show that Elonis had mens rea but thought that an instruction requiring proof of recklessness would be sufficient to show this. Alito stressed that the First Amendment does not protect true threats, which “inflict great harm and have little if any social value.”

Despite Elonis’ reliance on professional performers who used similar lyrics, Alito observed that “’[t]aken in context,’ lyrics in songs that are performed for an audience or sold in recorded form are unlikely to be interpreted as a real threat to a real person.” Alito would accordingly remand the case to the court of appeals to decide “whether Elonis' conviction could be upheld under a recklessness standard” and whether, alternatively, the instructions might be regardless as “harmless error.”

In a dissenting opinion, Justice Clarence Thomas observed that nine of 11 circuits that had interpreted the statute had found that it required a showing of general intent. Thomas further thought that Elonis’s words met the objective standard for a true threat.

Elonis’ own belief about the legal status of his words is immaterial, Thomas said. Thomas denied that a showing of general intent is equivalent to a showing of mere negligence – “there is nothing absurd about punishing an individual who, with knowledge of the words he uses and their ordinary meaning in context, makes a threat.”

Both English precedents and early state laws establish that freedom of speech has never included true threats, and “[w]e generally have not required a heightened mental state under the First Amendment for historically unprotected categories of speech.”  Thomas cited cases involving “fighting words” and cross burning. Elonis is just as guilty of issuing a true threat, Thomas said, as he would be had he mailed obscene materials to his wife or to the kindergarten class that he threatened.