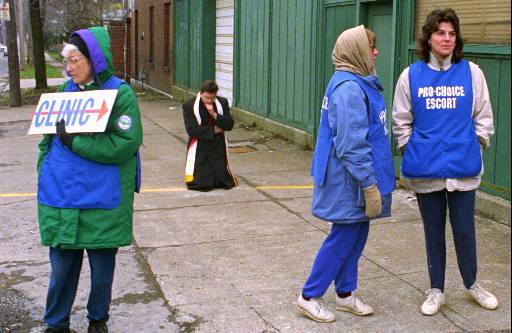 The Rev. Paul Schenck prays outside a "fixed buffer zone" near a driveway entrance to a Buffalo, New York, women's clinic during an anti-abortion protest in 1992. In a case brought by Schenck, the Supreme Court ruled in 1997, that a "floating buffer zone" violates a demonstrator's First Amendment rights but upheld a "fixed buffer zone" that keeps demonstrators at least 15 feet away. (AP Photo/John Hickey, used with permission from the Associated Press)

The Supreme Court in Schenck v. Pro-Choice Network of Western New York, 519 U.S. 357 (1997), held that fixed buffer zones around abortion clinics are constitutional, but floating buffer zones are not because they are overbroad in affecting political speech.

In the 1980s and 1990s, some anti-abortion activists began using a variety of tactics, up to and including violence and sabotage, to obstruct access to abortion clinics. Blockading clinics, which combined speech and action, became increasingly popular in the late 1980s.

Protesters would physically obstruct entrances to clinics, preventing not only patients but in some cases doctors and nurses from entering the facilities. Between 1988 and 1993, anti-abortion forces had created blockades in hundreds of cities in 45 states.

In response, many states and the federal government enacted legislation to protect access for women seeking abortions or reproductive counseling. For example, Congress passed the Freedom of Access to Clinic Entrances Act (FACE) in 1994. In addition, judges sometimes issued preemptive injunctions prohibiting certain forms of protest.

In light of the extensive record of intimidation of patients and practitioners at four medical clinics in upstate New York, a federal district court issued an injunction creating a 15-foot “buffer zone” around the clinics. Within this zone, “a conversation of a nonthreatening nature” initiated by up to two people with someone entering or leaving the clinic was permitted as long as the conversation ended if those entering the clinic made known that they wanted it to stop; demonstrations and other types of obstruction were prohibited.

The anti-abortion groups largely complied with the injunction for the first month, but then resumed obstructive activities. After contempt citations and hearings, the district court issued an injunction expanding the “fixed” 15-foot buffer zones, which created unobstructed spaces around physical entrances, and created “floating” buffer zones, which enjoined any demonstration “within fifteen feet of any person or vehicle seeking access to or leaving such facilities.”

Such injunctions present a potentially difficult First Amendment problem. On one hand, such injunctions are content neutral, but they also deal with speech that is combined with action, which allows the state latitude for regulation that it would not have if dealing with pure speech.

On the other hand, such injunctions in practice tend to limit the speech of anti-abortion groups in particular and can potentially encompass political speech as opposed to simple physical obstruction, which would suggest significant constitutional difficulties.

In Madsen v. Women’s Health Center, Inc. (1994), the Supreme Court held that injunctions protecting access to abortion clinics were constitutional only if they “burden no more speech than necessary to serve a significant government interest.” The Court applied this standard in deciding Schenck.

In the opinion for a 6-3 majority, Chief Justice William H. Rehnquist wrote that the fixed buffer zone was “necessary to ensure that people and vehicles trying to enter or exit the clinic property or clinic parking lots can do so” and that the factual record made clear that a less restrictive injunction would not adequately protect access to clinics.

For an 8-1 majority, however, Rehnquist stated that the floating buffer zones were unconstitutionally burdensome. The chief justice wrote that the restriction was overbroad because it reached traditional manifestations of political speech such as leafleting and picketing in ways that were unnecessary to achieve the state’s legitimate interest in protecting access to reproductive services.

In sum, his opinion continued a jurisprudence that allows significant injunctive powers to judges to protect access to abortion clinics, but also places considerable constraints on these powers.

The justices issued two other opinions concurring in part and dissenting in part. Justice Antonin Scalia, joined by Anthony M. Kennedy and Clarence Thomas, argued (following on Scalia’s dissent in Madsen) that fixed buffer zones represent unconstitutional restrictions on speech and that no sufficient cause for state action had been proven.