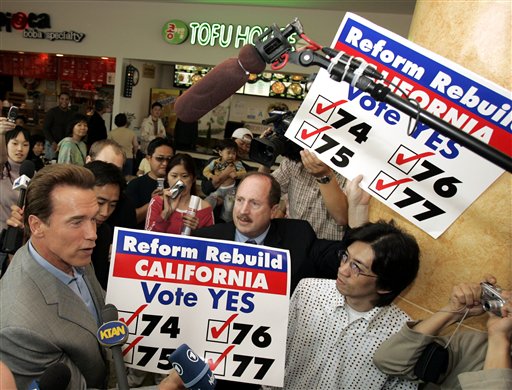 In this photo, California Gov. Arnold Schwarzenegger speaks to the media while touring the Koreatown Galleria in Los Angeles, Saturday, Oct. 29, 2005. The governor was trying to push through a slate of ballot initiatives that would weaken public employee unions and clamp down on state spending. Schwarzenegger's initiatives failed, but the special election led to Knox v. Service Employees International Union (2012), in which the U.S. Supreme Court struck down a union’s imposition of special dues to oppose Schwarzenegger's two referenda, which it applied to nonunion members under an agency-shop agreement. (AP Photo/Matt Sayles, used with permission from the Associated Press)

In Knox v. Service Employees International Union, 567 U.S. 298 (2012), the U.S. Supreme Court struck down a union’s imposition of special dues to oppose two referenda, which it applied to nonunion members under an agency-shop agreement. One of the referenda was designed to protect nonunion members’ First Amendment rights by exempting them from providing money for political advocacy.

The case arose in California after the Service Employees International Union, Local 1000 (SEIU) assessed nonunion employees 56.35% of annual dues, based on the previous year’s percentage of collections that had been used on direct-bargaining activities. The special assessment was to help pay for lobbying efforts against two anti-union Propositions on the ballot for November 2005 that were heavily pushed by California Governor Arnold Scharzenegger.

Proposition 75 would have required unions to get a public employee’s affirmative consent before charging them fees used for political purposes. Proposition 76 would have given the governor the ability to reduce state appropriations for public-employee compensation.

Nonunion members filed a class-action suit. A district court issued a summary judgment on their behalf, but the Ninth Circuit Court of Appeals reversed based on a balancing test it derived from Chicago Teachers Union v. Hudson (1986).

Supreme Court ruled in favor of the nonunion members

Alito began by refusing to declare the case moot, a request that SEIU made after it offered a full refund to all case members. Alito did not think such “postcertiorari maneuvers,” which would not preclude future attempts, kept the issue from being a live issue.

The compulsory fees permitted by agency shop arrangements were designed to prevent nonmembers from free-riding but remained “something of an anomaly” that provided “a remarkable boon for unions.” Far from establishing a balancing test, Hudson and other cases had “made it clear that any procedure for exacting fees from unwilling contributors must be ‘carefully tailored to minimize the infringement’ of free speech rights.” Prior decisions allowed for collection of fees with an opt-out provision “approach, if they do not cross, the limit of what the First Amendment can tolerate.”

In this case, Alito could see no reason for the Union not to provide “a fresh Hudson notice” when it enacted new fees. He noted that Proposition 75, which the union was opposing, would actually have bolstered the rights of nonunion members who were being assessed to oppose it.  Members should have been asked whether they wanted to opt in rather than having to choose to opt out.

This assessment of dues was a First Amendment violation

Moreover, the special assessment violated the First Amendment since, by the union’s own admission, the money being raised was designed to lobby against legislation — a distinctly political action. Alito further rejected the Union’s contention that it had actually under-billed (the Union believed that it actually spent 66.2% on collective bargaining, rather than the 56.35% that it had collected from nonmembers. Alito doubted that the “lobbying” in which the Union had engaged had been nonpolitical, and questioned whether it should have charged the same 56.35% for its new activities. If nonmembers were overcharged, the union denied their First Amendment rights whereas if they were undercharged there was no harm “because the union has no constitutional right to receive any payment from these employees” but receive it as a matter of legislative grace.

Sotomayor’s opinion concurred only in the Court’s judgment because she thought the Court majority had addressed constitutional issues that were not fully raised or argued in this case. Moreover, she thought it did not even answer these issues clearly, making it unclear whether its opt-in option applied only to special fees or to all of them.

In his dissent, Breyer thought the Union had properly calculated fees for nonmembers in an administratively feasible way.  Moreover, he did not think future special assessments were likely to be as clearly political as those in this case. He thought that fees for “lobbying” the legislature could be passed along to nonmembers. He further shared Sotomayor’s concern that the majority had attempted to address the opt-in versus the opt-out procedure.  While previous decisions have permitted states to institute an opt-in procedure, such decisions have not previously required it.

The majority in Harris v. Quinn (2014) relied heavily on statements from Knox when deciding to exempt personal health care workers in Illinois from being required to pay fees to a union.

As to the Schwarzenegger's ballot propositions, both failed.