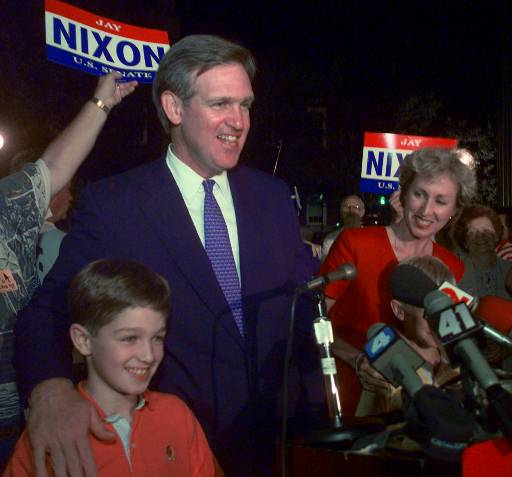 In Nixon v. Shrink Missouri Government PAC, 528 U.S. 277 (2000), the Supreme Court concluded that Missouri’s political contribution limits did not infringe on the First Amendment guarantees of free speech and association and the Fourteenth Amendment’s equal protection clause. In this photo, Missouri Attorney General Jay Nixon with his son Will, 8, and his wife Georganne announce they are ready for the next 92 days to run against incumbent U.S. Sen. Kit Bond (R-Mo.) in the general election. Nixon was on the downtown square of Independence, Mo., Tuesday, Aug. 4, 1998, after winning the democratic primary. Their 10-year-old son Jeremiah is partially hidden by the microphones. Nixon was the attorney general during the Shrink Missouri Government PAC case. (AP Photo/Cliff Schiappa, used with permission from the Associated Press)

A state political committee and a candidate for state auditor sought an injunction against enforcement of the law, arguing that the adjusted contribution limit of $1,075 for statewide office, down to $275 for lower offices, violated the First Amendment. The district court granted summary judgment for the state (and Attorney General of Missouri Jeremiah W. Nixon), but the Eighth Circuit Court of Appeals reversed, applying strict scrutiny and holding that the state had not produced evidence that the contribution limit was in response to corruption from large contributions.

Justice David H. Souter, writing for the Court’s majority, defended the approach, first articulated by the Court in Buckley v. Valeo (1976), of evaluating contribution limits under a less rigorous test than that of spending limits. He observed that the evidence required to sustain a law will vary with the novelty of the law and with whether those challenging the law could show evidence casting doubt on the conclusion that large contributions should be regulated. Souter also found that there was no evidence that the state’s limits “prevented candidate or political committees from amassing the resources necessary for effective advocacy.” The test for whether a contribution limit was unconstitutional was “whether the contribution limitation was so radical in effect as to render political association ineffective, drive the sound of a candidate’s voice below the level of notice, and render contributions pointless.”

Justice Anthony M. Kennedy dissented and called for the overruling of Buckley because it did not provide sufficient protection for political speech. Also in dissent, Justice Clarence Thomas, joined by Justice Antonin Scalia, agreed that Buckley was a flawed decision, allowing the regulation of political contributions while protecting “begging, shouting obscenities, erecting tables on a sidewalk and refusing to wear a necktie.” He also concluded that contribution limits deserved strict scrutiny and Buckley’s holding to the contrary should be abandoned. He castigated the majority for adopting a vague definition of corruption that allows the government to impose broad restrictions on campaign finance activity.