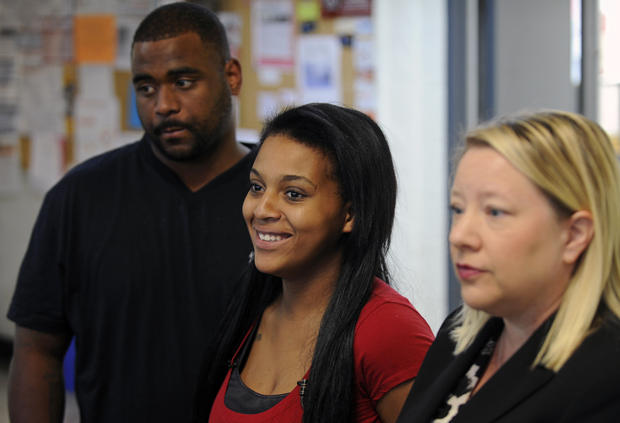 In this Sept. 18, 2013 photo, Jawaan McCullough, left, Jaleesa Martin, center, and lawyer Kristi Davis speak to reporters in Newport, Tenn. after a judge overturned another judge's order that said the name of McCullough and Martin's 8-month-old son should be changed to Martin because "'Messiah is a title that is held only by Jesus Christ." (AP Photo / The Knoxville News Sentinel, Amy Smotherman Burgess, used with permission from The Knoxville News Sentinel)

U.S. Supreme Court decisions such as Meyer v. Nebraska (1923) and Pierce v. Society of Sisters (1925) have recognized broad parental rights over their children’s education. This right, which rests in part on the First Amendment would likely also protect a broad, but not unlimited, right for parents to choose the names of their children. A decision by the Eighth U.S. Circuit Court of Appeals has addressed the issue of surnames, by overturning a district court decision and upholding a state law prohibiting a couple from giving a child a surname other than their own. (See Henne v. Wright, 711 F. Supp. 511 [D. Neb. 1989, rev’d. 904 F.2d 1208].)

A comprehensive survey of the topic by Professor Carlton F. W. Larson has observed that some states currently recognize the right of a state to reject names that contain obscenities, numerals, symbols, or some combination of the foregoing (2011, 161), which he thinks probably stem from a compelling state interest.  He is more critical of laws (like one in California) that prohibits accent and other diacritical marks.  He thinks there are occasions where limits on surnames (or the right to file a civil suit in such cases) might be appropriate, such as laws against defamatory falsehoods, as a way of preventing attributing a child to someone other than his father.

Similarly, he hypothesizes that a state can probably require parents to provide both a first and last name but, recalling the song A Boy Named Sue, doubts that a state can limit “boy’s” names to one gender and “girl’s” names to another.  Laws requiring that states automatically give children the last names of their fathers, rather than of the mother or some combination of the two, would presumably run afoul of Equal Protection requirements.

Larson believes that the right to name one’s children can be derived either from idea of substantive due process (at issue in Meyer and Pierce) or as part of the right to expressive speech covered by the First Amendment.  As Larson illustrates, a law that prevented parents from naming a child Barack (but not George or Donald) would probably be unconstitutional in part because it would be viewpoint discriminatory.

Just as a state can prohibit obscenities, however, it probably has the power to prevent a child from receiving a name that would result in severe consequences for the child or force others to repeat distasteful words when referring to the child. Larson observes that a California appellate court rejected a plea by an adult to change his name to include the racially-charged “N” word (192).  He believes that any laws giving the Registrar of Vital Statistics the power to reject a name on behalf of a child’s best interest should be subject to de novo judicial review.

In 2013, a Tennessee case added a dimension to the issue after child support magistrate Lu Ann Ballew tried to prevent a mother from naming her 8-month-old son “Messiah.”  Ballew had based her reasoning on the fact that “’Messiah’ is a title that is held only by Jesus Christ.” (CBS News, 2013).  Chancellor Telford E. Forgety subsequently overturned this ruling as a violation of the Establishment Clause.  It might also have arguably violated the parents’ First Amendment free exercise rights as well.   For example, it is not uncommon for Hispanic parents to name a son Jesús.