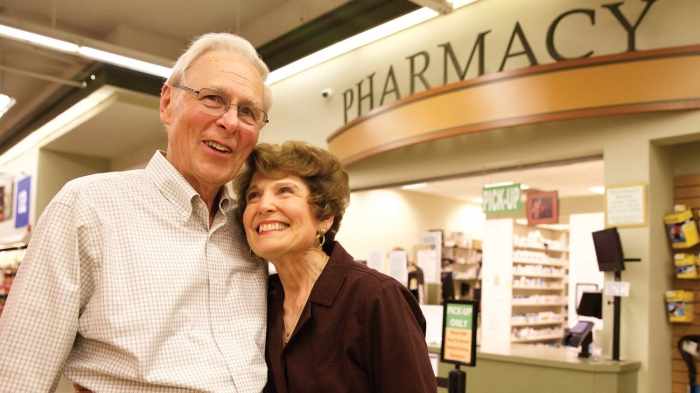 Ken and Lynn Storman in front of their pharmacy in Olympia, Washington. The U.S. Supreme Court refused to hear the Stormans' appeal, in which they said their First Amendment freedom was being violated through a state law that prohibited them from refusing to dispense the contraceptive pill Plan B. (Photo by Alliance Defending Freedom)

It takes four Supreme Court justices to hear a case. In Stormans Inc. v. Wiesman, 579 U.S. ____ (2016), the Court rejected certiorari, but Justice Samuel Alito, joined by Chief Justice John G. Roberts, Jr., and Justice Clarence Thomas, filed a dissent, in which they said that this denial was “an ominous sign.”

The case involved a Washington state law that prohibited pharmacists from refusing to provide a drug “because its owner objects to delivery on religious, moral, or other personal grounds.”  The law had been struck down by a federal district court but upheld by the Ninth U.S. Circuit Court of Appeals.

In this case, the law required the Stormans family, who owned a pharmacy in Olympia, Washington, to dispense contraceptives, including those that prevented implantation of an embryo and which the Stormans thought were equivalent with abortion, which conflicted with their Christian religious beliefs.  Thirty-three pharmacy associations had filed petitions asking the Court to take the case.

Pharmacy had referred customers to other places to get contraceptives

Alito observed that the Stormans had been willing to refer customers to other pharmacies, of which there were another 30 within a five-mile distance.  He further said that because of this facilitated referral system, “none of Ralph’s customers has ever been denied timely access to emergency contraceptives.”

Alito observed that the district court had found that the “predominate purpose” of this law, which had been adopted after the Governor exerted pressure, was to “stamp out the right to refuse to dispense emergency contraceptives for religious reasons.”   Moreover, the law allowed other secular exceptions, including the right to refuse drugs to those who could not afford it or who were on plans (like Medicaid) that the pharmacy chose not to accept. Alito believed this demonstrated that the law was a “religious gerrymander.”  Moreover, the state of Washington has stipulated that the facilitated referrals did not pose a threat to timely access to the contraceptives.

Alito relied heavily on the decision in Church of Lukumi Babalu Aye v. City of Hialeah (1993), where a city’s laws against the killing of animals were shown to be directly related to the suppression of the Santeria religion, which involved animal sacrifice. Alito adduced evidence to suggest that the State had not enforced regulations against other exceptions. Noting that Washington State was willing to allow pharmacists to resign rather than fulfill its mandates, which would have an even greater impact on service to potential customers, Alito concluded that the State’s actions exhibited “hostility toward religious objections.”

This suggested that the law was not neutral, and would not meet the “strict scrutiny” required by the free exercise clause of the First Amendment, which “commits government itself to religious tolerance.”  Alito feared that Washington’s law posed a “concededly unnecessary burden on religious objectors” that trampled on “fundamental rights.”