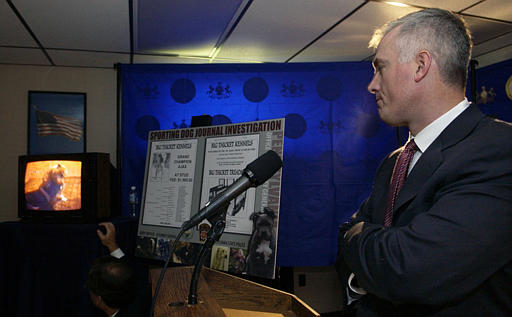 The Supreme Court in 2010 overturned a federal law that made it a crime to create, sell or possess images of animal cruelty if done for commercial purposes as overly broad, but they refused to create a new category of protected speech. In United States v. Stevens, the Court said the law was overly broad and could apply to hunting videos and livestock slaughter. In this 2004 photo, Pennsylvania Attorney General Jerry Pappert watches video of a dog fight at a news conference in Belle Vernon, Pa., Monday. Pappert was announcing that the state would bring animal cruelty charges against two men who allegedly promoted pit bull dog fighting across the country as publishers of the Sporting Dog Journal. (AP Photo/John Heller, used with permission from The Associated Press)

In United States v. Stevens, 559 U.S. 460 (2010), the U.S. Supreme Court invalidated a federal law criminalizing the creation, distribution, or possession of images of animal cruelty as substantially overbroad. The Court resisted efforts by the federal government to create a new unprotected category of speech.

Federal authorities indicted a Pennsylvania-based man named Robert J. Stevens for violating 18 U.S.C. § 48, which prohibits the creation, sale, or possession of images of animal cruelty if done for commercial purposes. Stevens produced and sold videos of pitbulls fighting with each other or mauling other animals.

Stevens moved to dismiss the indictment, claiming the law was facially invalid because of its substantial overbreadth. A federal district court rejected that argument, and a jury convicted Stevens. The district court sentenced him to more than three years imprisonment. However, a divided en banc (full panel) of the Third Circuit U.S. Court of Appeals vacated the sentence, declaring the law facially unconstitutional.

The government appealed to the U.S. Supreme Court, which ruled 8-1 for Stevens.

Writing for the Court, Chief Justice John G. Roberts, Jr. explained the odd legislative history of the statute, which was originally designed to address the interstate market of “crush videos” – videos of women in high heels crushing small animals.  The measure eventually morphed into a general law against depictions of animal cruelty.

Roberts resisted this in strong language, writing: “Our decisions in Ferber and other cases cannot be taken as establishing a freewheeling authority to declare new categories of speech outside the scope of the First Amendment.”

Having rejected the attempt to create a new unprotected category of speech, Roberts then addressed whether the law was substantially overbroad.  He found that the law was too broad and could apply to hunting videos and livestock slaughter.  He explained that certain types of hunting are lawful in some states and unlawful in others and could lead to prosecutions of individuals for conduct that was legal in certain jurisdictions.

Roberts explained that the market for dogfighting videos was “dwarfed by the market for other depictions, such as hunting magazines and videos.” To Roberts, this was clear evidence that the statute, as currently written, was substantially overbroad. He left open the question of whether a narrowly drawn statute targeting only crush videos or dogfighting videos would pass constitutional muster.

Justice Samuel Alito filed a solitary dissent. He argued that the Court should defer to the government’s interpretation of the law as applying only to crush videos and dogfighting videos.  He reasoned that the law “has a substantial core of constitutionally permissible applications.”