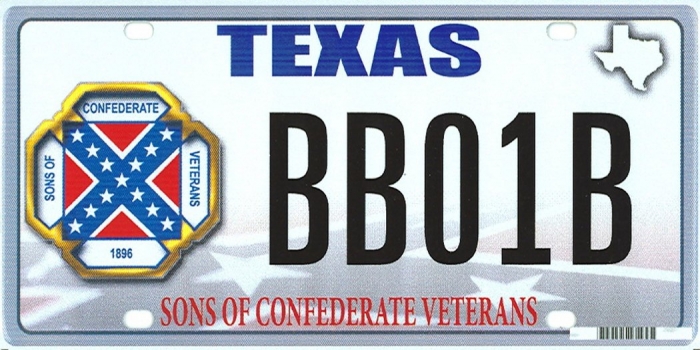 The Texas Division of the Sons of Confederate Veterans proposed a specialty license plate (shown above), but Texas refused it, setting off a case that went to the Supreme Court. The Court upheld the state's decision, saying the license plates were a form of government speech and protected. (Credit: Texas Department of Motor Vehicles, public domain)

In Walker v. Texas Division, Sons of Confederate Veterans, 115 S.Ct. 2239 (2015), the U.S. Supreme Court ruled 5-4 that the state of Texas could deny a specialty license plate to the Sons of the Confederate Veterans without violating the First Amendment.

Instead, the majority reasoned that specialty license plates were a form of government speech and, therefore, immune from First Amendment scrutiny.

The Texas Division of the Sons of Confederate Veterans proposed a specialty plate that prominently featured the Confederate battle flag. The Texas Department of Motor Vehicles Board rejected the plate, reasoning that too many people find the Confederate flag offensive.

The Sons of Confederate Veterans sued, claiming that the Board had committed unlawful viewpoint discrimination. A federal district court ruled in favor of the Board.  However, a divided three-judge panel of the Fifth U.S. Circuit Court of Appeals reversed, finding that the specialty license plates were a form of private speech and that the state denial of the plate design amounted to viewpoint discrimination.

“Indeed, a person who displays a message on a Texas license plate likely intends to convey to the public that the State has endorsed that message,” Breyer wrote. “If not, the individual could simply display the message in question in larger letters on a bumper sticker right next to the plate.”

Breyer also noted that, like the monuments in the public park in the Summum decision, the state of Texas retained final approval authority over the content of the specialty license plates.

Justice Samuel A. Alito, Jr. authored a dissenting opinion, criticizing the majority for “pass[ing] off private speech as government speech.  Alito asked whether people watching cars passing by with specialty license plates would view the messages on the plates as primarily those of the government or of the drivers: “As you sat there watching these plates speed by, would you really think that the sentiments reflected in these specialty plates are the views of the State of Texas and not those of the owners of the cars?”

Alito warned that the majority’s broad application of the government speech doctrine “takes a large and painful bite out of the First Amendment.”