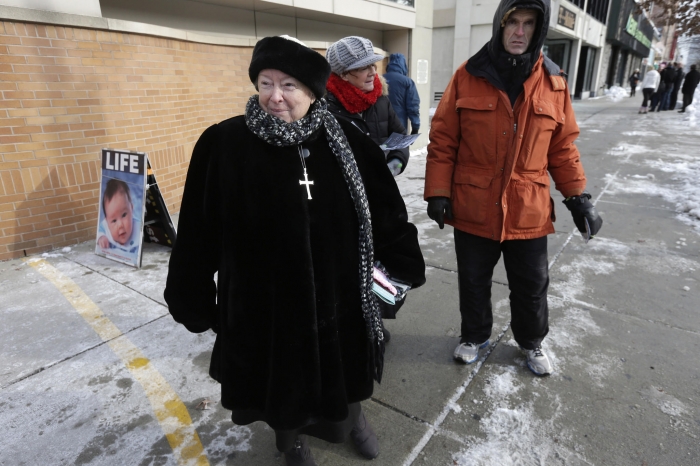 This Dec. 17, 2013 photo shows anti-abortion protester Eleanor McCullen, of Boston, standing at the painted edge of a buffer zone outside a Planned Parenthood location in Boston. The Supreme Court struck down a 35-foot protest-free zone outside abortion clinics in Massachusetts. (AP Photo/Steven Senne)

All nine U.S. Supreme Court justices agreed in McCullen v. Coakley, 573 U.S. ____ (2014) that a Massachusetts law prohibiting individuals from standing in a public sidewalk within 35 feet of an abortion facility was unconstitutional. However, there was a strong disagreement between Chief Justice John G. Robert’s decision on behalf of five justices and the concurring opinions, filed by Justices Antonin Scalia and Samuel Alito.  The majority opinion agreed that the law was neither content nor viewpoint based and, therefore, was not subject to strict scrutiny, but found it unconstitutional because it was not narrowly tailored.  By contrast, the concurring justices would have struck the law down because they thought the law was either content or viewpoint based.

Robert’s majority opinion observed that Massachusetts had an earlier law that was based on a buffer zone provision upheld by the Court in Hill v. Colorado (2000).  But this law had not prevented counselors from approaching potential patients and attempting to dissuade them from having abortions. So Massachusetts adopted a law lengthening the distance between abortion opponents and patients, and petitioners who had been active at abortion clinics in Boston, Worcester, and Springfield challenged it. A federal district court and the First U.S. Circuit Court of Appeals sided with the state and ruled that the law placed  reasonable “time, place, and manner” restrictions on speech.

Roberts observed that public walkways and sidewalks were traditional public fora, where individuals could expect to encounter speech with which they might disagree.  Although such fora were still subject to reasonable time, place, and manner restrictions, they were subject to greater scrutiny than had they taken place in less public settings.  Roberts rejected arguments that the buffer zones discriminated against abortion-related speech or that they favored one viewpoint over another, which meant that they were not subject to strict scrutiny. Although applying the law only to abortion-related clinics may have a disproportionate impact on such speech, the law was directed to past cases of “crowding, obstruction, and even violence outside such clinics.”  Similarly, the majority did not think it was problematic to exempt employees or agents of the clinic from such regulations.

Majority did not think law was narrowly tailored

Although the majority viewed the law as content neutral, it did not think that it was “’narrowly tailored’ to serve a significant governmental interest.”  Buffer zones impose serious burdens on speech. Evidence clearly showed that it had made it more difficult for individuals who wanted to dissuade women from getting abortion from engaging in direct conversations with clinic patients.  Although the law would still allow for “protests” outside of protected zones, it made one-on-one counseling quite difficult. No other state had adopted laws with similar fixed boundaries.  Moreover, there were many other laws in place that the state could utilize if it were concerned with criminal conduct or even congestion.

The state’s claim that it had tried other approaches was not credible in light of the fact that it had not pursued such criminal prosecutions and that it had been years since it had issued injunctions.  Moreover, there was little evidence that the problem existed except on Saturday mornings outside the Boston clinic. While fixed buffers would undoubtedly make such efforts easier, “the prime objective of the First Amendment is not efficiency.”

Moreover, this case differed from buffer zones accepted in Burson v. Freeman (1992) involving polling places, where the presence of law-enforcement officials might suggest coercion in the electoral process. In short, Massachusetts had taken “the extreme step of closing a substantial portion of a traditional public forum to all speakers.”

Concurring opinions thought the law was not content-neutral

In Scalia’s bitter concurrence, joined by Justices Anthony Kennedy and Clarence Thomas, he criticized Roberts’ opinion for continuing to give “abortion-rights advocates a pass when it comes to suppressing the free-speech rights of their opponents.”  Given the majority’s decision that the law was not narrowly tailored, he did not think that the Court should have addressed the issue of content neutrality, which was not essential.  Moreover, the fact that the law established buffer zones only at abortion clinics, where abortion was likely to be the dominant item of conversation, meant the law was far from content-neutral and was content-based.  He further found it problematic to exclude clinic employees, who were likely to exempt pro-abortion counselors from the ban.  Scalia thus regarded the law as “unconstitutional root and branch.”

In a separate concurring opinion, Justice Samuel Alito also thought that the law “blatantly discriminates based on viewpoint,” but agreed with the majority that even if it were not, it would still be unconstitutional because it was not narrowly tailored.