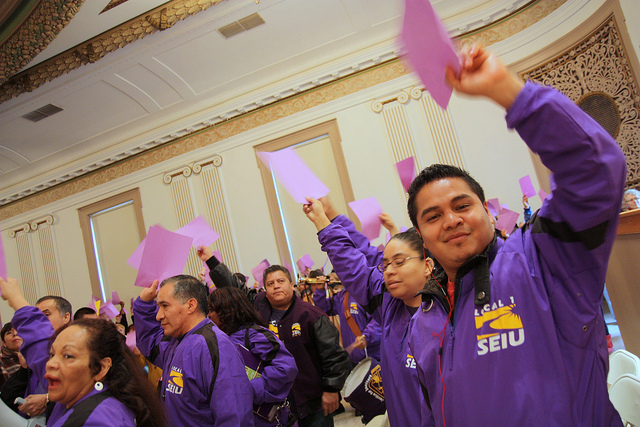 The Service Employees International Union lost its ability in Illinois to collect fees from nonmember home health care workers paid by state funds after the Supreme Court refused to extend an earlier precedent in Harris v. Quinn (2014). (Photo of SEIU strike vote in 2012 by SEIU Local 1 in Chicago on Flickr, CC BY 2.0)

In a 5-4 decision, written by Justice Samuel Alito, in Harris v. Quinn, 573 U.S. ____ (2014), the U.S. Supreme Court refused to extend the precedent in Abood v. Detroit Board of Education (1977) and require personal care workers in Illinois to join a union against their will.

The decision centered around Illinois’ Rehabilitation Program, which employed individuals (sometimes relatives) to provide home health care to individuals who might otherwise have to be institutionalized. The patient, or “customer,” actually was the employer, but the state paid the salaries.

Illinois’ Public Labor Relations Act (PLRA) contains an agency-fee provision that requires employees who do not choose to join a union to pay a fee to it for its role in seeking increased salaries and benefits.  Illinois Governor Rod Blagojevich issued an executive order, later codified into law that allowed the Service Employees International Union (SEIU) to represent home health-care workers, which, after a vote, was designated the sole collective bargaining representative for the workers.

Nonmember home health-care workers were required to pay a “fair share” of union dues.   A number of employees, funded by the National Right to Work Legal Defense Foundation, filed a class action suit questioning this decision, but both the district court and the Seventh U.S. Circuit Court of Appeals rebuffed their claim. The Seventh Circuit court relied chiefly on the Abood decision, which had compelled public employees who chose not to join a union to pay agency fees connected to work the union did on their behalf through collective bargaining.

Previous 'free rider' case had been an anomaly, Court said

However, in Knox v. Service Employees (2012), the Supreme Court had labeled Abood as “something of an anomaly” in that its attempt to solve the problem of “free riders” (those who get benefits without paying) are generally insufficient to overcome First Amendment claims. Alito observed that the decision in Railway Employees v. Hanson (1956), upon which Abood had relied, had barely mentioned the First Amendment.

Moreover, Alito said that Justice William O. Douglas, who had written the decision, later said that he regarded Hanson as “a narrow exception to be closely confined.” Similarly, in Machinists v. Street, Justice Hugo Black had written a dissenting opinion pointing to the serious practical problems involved in trying to separate a union’s collective bargaining activities from its political advocacy.

The Court had based its decision in Abood on the desirability of “labor peace” and the problem of “free riders.” The first was promoted by designating a single union to represent workers while the second was furthered by making sure that all workers helped pay for this representation. Alito believed that Abood failed adequately to understand the differences between public-sector and private-sector unions and the practical difficulties of deciding which expenditures were “chargeable” to workers and which were not.

In any event, Abood “involved full-fledged public employees” in a way that this case did not. The personal assistants who provide health care are actually hired and fired by the individuals for whom they care.  State officials cannot enter homes to check on their work, and they do not enjoy full state benefits.  Whereas Abood was justified in part by the fact that governments prevent unions from bargaining for benefits for their members that do not extend to others, the state mandates that all personal assistants shall be paid by the same hourly wage, and the scope of collective bargaining that the union can exercise on their behalf is thus fairly limited.

Under these circumstances, Alito did not think it was appropriate to extend the Abood ruling to “partial-public employees, quasi-public employees, or simply private employees.”  “Compelled funding” of the speech of others presents similar dangers to “compelled speech.”  The decision in Knox v. SEIU (2012) indicated that compelled speech was subject to “exacting First Amendment scrutiny,” which went beyond that typically given simply to commercial speech and which Alito did not think was established in this case.  He noted that in this case the petitioners were not claiming a right to form a rival union, and that threats to labor peace were diminished by the fact that the employees were not working in a single facility or set of facilities.  Alito also doubted whether the effectiveness of the union in this case depended on mandatory fees.

In Pickering v. Board of Education (1968), the U.S. Supreme Court had applied a balancing test that weighed the free speech rights of public employees on matters that were not of public concern against the government employer’s interest in a disruption-free workplace.  Alito did not think that test applied in this case because he did not think the state was performing a traditional employer role and because he thought that the pay of employees was a public issue.

Alito further denied that his ruling was inconsistent either with rulings permitting an integrated (compulsory) bar in Keller v. State Bar (1990) or with the decision in Board of Regents v. Southworth (2000) relative to the collection of student activity fees.  The majority thus refused to extend the Abood precedent to this case.

Justice Elena Kagan wrote the dissenting opinion, which Justices Ruth Bader Ginsburg, Stephen G. Breyer, and Sonia Sotomayor joined.  Kagan strongly disagreed that the decision in Abood was an anomaly or inapposite to this case.  She pointed out that Illinois did establish wages and benefits, including health insurance for the affected workers whose benefits had been increased through collective bargaining. Kagan argued that many of Alito’s arguments were irrelevant.

Kagan was particularly concerned that Abood remain in place as a matter of precedent, or stare decisis.  She pointed out that numerous court decisions had cited this precedent, that it had created significant reliance interests, and that, aside from the majority’s exclusion of “partial-public” employees, it remained good law. She further argued that the case, and the Pickering decision, had drawn appropriate lines that the Court should continue to follow.  She thought it was important to recognize “an essential distinction between unions [which exercised collective bargaining], and special-interest organizations [which specialized in advocacy] generally.”   Although pleased that the majority opinion had not imposed a “right-to-work regime for all government employees,” she remained disappointed that it did impose it on the personal assistants in this case.