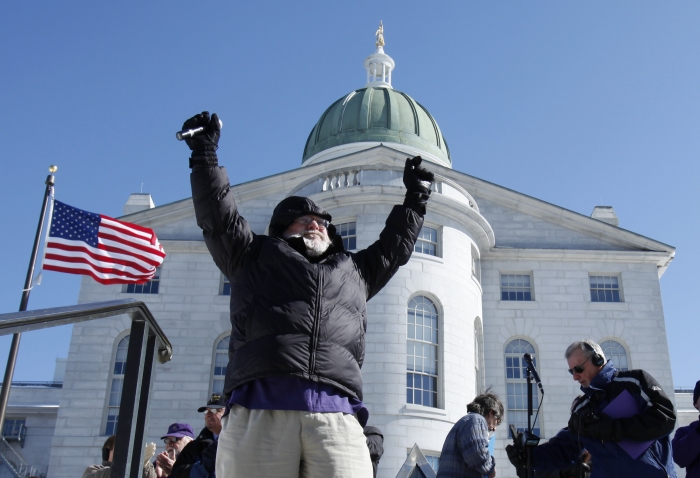 Nonmembers of the Maine State Employees Association Union challenged having to pay an affiliation fee to the union that covered litigation activities that didn't directly benefit the union. But the Supreme Court upheld the charges, reasoning they were appropriately connected to collective bargaining and protected by the First Amendment. Here, the president of the Maine State Employees Association, Bruce Hodsdon, leads a rally of state workers in opposition to the governor's budget. (AP Photo/Robert F. Bukaty, used with permission from the Associated Press)

In Locke v. Karass, 555 U.S. 207 (2009), the U.S. Supreme Court, ruled that a local union could charge nonmembers for national litigation expenses as long as the subject matter of the litigation is related to collective bargaining and the arrangement is reciprocal.

The State of Maine requires government employees to pay a service fee to the Maine State Employees Association, the local union that acts as their collective bargaining agent even if they do not belong to the union.

Nonmembers of the union contended that they should not have to pay for an affiliation fee that funds litigation activity on the national level that does not benefit the local union.  They argued that it amounted to a form of unconstitutional compelled speech in violation of the First Amendment.

Both a federal district court and the First U.S. Circuit Court of Appeals upheld the compelled fees and rejected the First Amendment challenge.  On further appeal, the U.S. Supreme Court agreed in a decision authored by Justice Stephen Breyer.

Breyer surveyed many of the Court’s prior decisions in this area, most notably Abood v. Detroit Board of Education (1977) and Lehnert v. Farris Faculty Association (1991).   These decisions allowed unions to charge nonmembers as long as the charges bore an appropriate relation to collective-bargaining activity.

Breyer reasoned that the charges in this case were appropriate as long as there was a connection or “appropriate relation to collective bargaining” and there was reciprocity in that the local payments “may ultimately inure to the benefit of the members of the local union.”

Breyer could not find any “significant difference between litigation activities and other national activities the cost of which this Court has found chargeable.”    He concluded that the “national litigation expenses before us are both appropriately related to collective bargaining and reciprocal.”

Justice Samuel Alito, joined by Chief Justice John G. Roberts, Jr. and Justice Antonin Scalia, wrote a concurring opinion.  He stressed that the majority opinion did not define the meaning of “reciprocity” or “reciprocal in nature” but concurred because the existence of reciprocity was assumed by the parties and not in dispute.