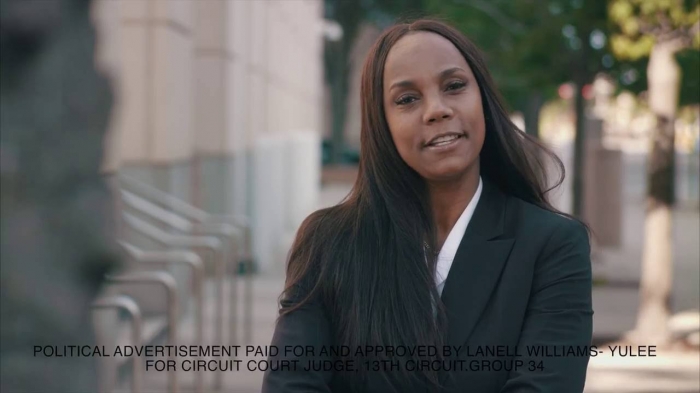 Lanell Williams-Yulee asked people to donate to her campaign when she ran for a county judicial position in Tampa, Florida in 2009. Afterward, the Florida Bar filed a complaint against her for violating the anti-solicitation rule in judicial races. She appealed to the Supreme Court. The Court upheld in a 5-4 decision that Florida's rule prohibiting judicial candidates from personally raising funds for campaigns served a compelling state interest of preserving judicial integrity. (Screenshot of a campaign ad by Lanell Williams-Yulee on YouTube)

The Court ruled 5-4 that the law furthered the state’s compelling interests in preserving the integrity of its judiciary and did not violate the First Amendment. This is one of the rare decisions in which the Court upheld a regulation from free-speech challenge after applying strict scrutiny.

Lanell Williams-Yulee ran for a seat on Hillsborough County court in 2009. She drafted a letter announcing her candidacy and then asking people to donate to her campaign. She sent the letter to local voters and posted it on her campaign website.

Williams-Yulee lost the election in the primary and then the Florida Bar filed a complaint against her for violating the anti-solicitation rule. A referee recommended that Williams-Yulee receive a public reprimand. The Florida Supreme Court adopted the referee’s recommendation, finding that the rule advanced the state’s compelling interest in the integrity of the judiciary.

Williams-Yulee appealed to the U.S. Supreme Court. Writing for the majority, Chief Justice John G. Roberts, Jr. acknowledged that the Florida anti-solicitation rule discriminated against speech based on content and must be evaluated under strict scrutiny, as the Court did in Republican Party of Minnesota V. White (2002).

However, Roberts determined that this was one of those “rare cases” where a content-based law survived strict scrutiny. He reasoned that the state has an even stronger interest in preserving the integrity of judicial elections even more so than legislative or executive elections.

Williams-Yulee acknowledged the state’s compelling interest, but argued that the provision was not narrowly tailored, because the state allowed a judge’s campaign committee to solicit funds. Roberts responded to this underinclusiveness argument by writing that a “state need not address all aspects of a problem in one fell swoop.”

Roberts explained that the law was narrowly tailored because it addressed “the conduct most likely to undermine public confidence in the integrity of the judiciary: personal requests for money by judges and judicial candidates.”

Roberts also wrote that the law did not restrict too much speech, because judicial candidates could still contact potential supporters and promote their campaigns through different forms of media. He added that the First Amendment requires the law to be narrowly tailored, but not “perfectly tailored.”

Justice Stephen Breyer wrote a short concurring opinion, advancing his view articulated in Nixon v. Shrink Missouri Government PAC (2000) that the different strands of scrutiny should not be rigidly or mechanistically applied. Justice Ruth Bader Ginsburg also authored a concurring opinion, explaining that the rules for judicial elections should be different than other political elections.

Justice Antonin Scalia, joined by Justice Clarence Thomas, filed a dissenting opinion. He wrote that the content-based law fails strict scrutiny and violates the First Amendment. Scalia accused the majority of failing to apply a traditional strict scrutiny standard, writing that the majority’s reasoning is “not strict scrutiny; it is sleight of hand.”  He concluded his dissent with the memorable line that “the First Amendment is not abridged for the Brotherhood of the Robe.”

Justice Samuel Alito also authored a dissenting opinion, emphasizing that this Florida provision was not narrowly drawn. He wrote that it was “as narrowly tailored as a burlap bag.”  He warned that the Court had damaged the strict scrutiny standard.