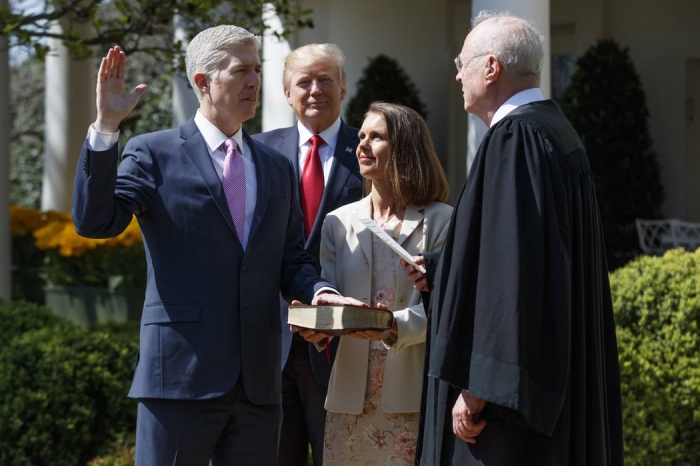 President Donald Trump watches as Supreme Court Justice Anthony Kennedy administers the judicial oath to Judge Neil Gorsuch during a re-enactment in the Rose Garden of the White House in 2017 in Washington. Gorsuch's wife Marie Louise holds a Bible at center. While his record on the First Amendment on the High Court has yet to be determined, Gorsuch showed a significant degree of sensitivity and knowledge of various First Amendment issues while serving on the court of appeals. (AP Photo/Evan Vucci, used with permission from the Associated Press)

Neil Gorsuch (1967 - ) is an associate justice of the U.S. Supreme Court, who previously served as a judge on the 10th U.S. Circuit Court of Appeals.  He was appointed by President Donald J. Trump in 2017.

After his law school graduation, Gorsuch clerked for Judge David B. Sentelle on the U.S. Court of Appeals for the D.C. Circuit and then for U.S. Supreme Court Justices Byron White and Anthony Kennedy. Gorsuch then worked for a litigation firm in Washington D.C. for seven years.

Gorsuch next worked in the U.S. Department of Justice as principal deputy to Associate Attorney General Robert McCallum in 2005 and 2006.  In 2006, President George W. Bush appointed Gorsuch to the 10th U.S. Circuit Court of Appeals.

During this time on the bench, Gorsuch penned many First Amendment opinions.  He ruled that prison officials may have violated the religious liberty rights of an inmate when they denied him access to a sweat lodge in Yellowbear v. Lampert (10th Cir. 2014).   He showed impressive knowledge of defamation law in rejecting a lawsuit by a prison inmate who claimed he was falsely smeared by a television program in Bustos v. A & E Television Network (10th Cir. 2011). He also showed excellent command of public employee free-speech jurisprudence by identifying the impact of Garcetti v Ceballos (2006) in his opinion Casey v. West Las Vegas Indep. Sch. Dist. (10th Cir. 2007).

Gorsuch is known for his sharp and effective writing style and ability to explain complex legal doctrine in readable plain English.