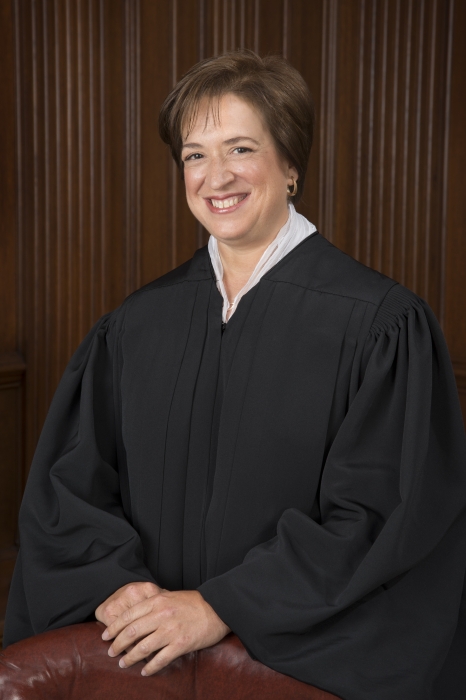 Supreme Court Justice Elena Kaga had an illustrious legal and academic career before being appointed to the Court by Obama. Known for her deep knowledge of First Amendment issues, Kagan has written both concurring and dissenting opinions in many Supreme Court First Amendment cases. (Photo by Steve Petteway, Collection of the Supreme Court of the United States - The Oyez Project, CC BY-SA 3.0)

Elena Kagan (1960- ) is an associate justice of the U.S. Supreme Court known for her deep knowledge of First Amendment issues, not only as a jurist but also as a former member of the legal academy.

Kagan is known as a legal academic

Kagan clerked for Judge Abner J. Mikva of the U.S. Court of Appeals for the District of Columbia and then for U.S. Supreme Court Justice Thurgood Marshall. She then practiced at the Washington, D.C., law firm of Williams & Connelly before joining the faculty at the University of Chicago Law School.

As an academic, Kagan often wrote about First Amendment free-speech issues. For example, she wrote

Her scholarship shows a deep understanding of First Amendment principles and doctrines.

Kagan was appointed to the Supreme Court by Obama

In 2009, President Barack Obama appointed her as solicitor general of the United States, in which capacity she argued numerous cases before the U.S. Supreme Court, including the landmark campaign finance decision Citizens United v. Federal Elections Commission (2010). Then, in 2010, President Obama appointed her to the U.S. Supreme Court. The Senate confirmed her by a vote of 63 to 37.

Kagan has written many First Amendment opinions and dissents

To date on the high court, Kagan’s most significant First Amendment opinions have been written either in concurrence or dissent. For example, she wrote a dissenting opinion in the establishment-clause decision Town of Greece v. Galloway (2014). She believed that the town’s practice of having mainly Christian prayers before town meeting violated a “norm of religious equality” and “engaged in a course of religious favoritism anathema to the First Amendment.”

She has dissented in many of the Court’s 5–4 campaign-finance cases.

In Arizona Free Enterprise Club’s Freedom Club v. Bennett (2011), she wrote the dissenting opinion in a case where the majority had invalidated parts of Arizona’s Clean Elections Act that limited the spending of wealthy candidates to that of publicly funded candidates. “The First Amendment’s core purpose is to foster a healthy, vibrant political system full of robust discussion and debate,” she wrote. “Nothing in Arizona's anti-corruption statute, the Arizona Citizens Clean Elections Act, violates this constitutional protection.”

In Reed v. Town of Gilbert (2015), Kagan authored a concurring opinion that agreed that an Arizona town’s sign ordinance was unconstitutional but questioned whether the Court had overstated the content-discrimination principle.

“We can administer our content-regulation doctrine with a dose of common sense, so as to leave standing laws that in no way implicate its intended function,” she wrote.