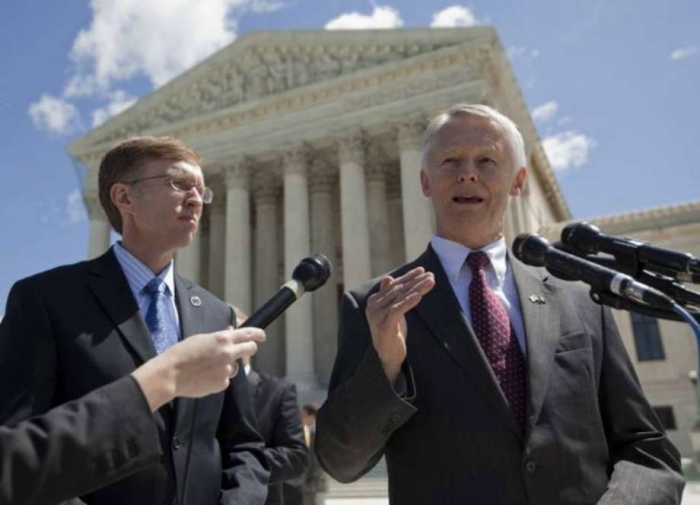 In Doe No. 1 v. Reed, 561 U.S. 186 (2010), the U.S. Supreme Court, upheld a Washington state law that required the disclosure of referendum petition signers and ruled that such a law on its face does not violate the First Amendment. Only Justice Clarence Thomas dissented from the Court’s ruling.

Groups petitioned the government to see who signed a petition

In May 2009, the Washington state governor signed into law a measure that expanded the benefits of state-registered domestic partners, including same-sex domestic partners.   In July 2009, Protect Marriage submitted to the state’s secretary of state, Sam Reed, more than 137,000 signatures asking for the measure to be put on a referendum ballot so the state’s voters could approve or disprove of the measure.  In November 2009, the measure was placed on the ballot and voters approved by a margin of 53% to 47%.

The Washington Coalition for Open Government and Washington Families Standing Together then petitioned the government for a public records request, asking for the identities of those who signed the petition trying to challenge the same-sex benefits measure.

Petition sponsor and some signers sued

The referendum petition sponsor and certain signers, proceeding anonymously, sued in federal district court.  They contended that the state’s Public Records Act was unconstitutional to the extent that it would force the disclosure of the names of those who signed the petition.  They argued that the petitioner signers could be subjected to harassment and discrimination.

A federal district court enjoined the release of the names, finding that the plaintiffs were likely to succeed in their claim.  On appeal, the 9th U.S. Circuit Court of Appeals reversed and determined the opposite, finding the claims were likely to fail.

On further appeal, the U.S. Supreme Court agreed with the 9th Circuit and upheld the law from First Amendment challenge.  In his opinion, Chief Justice John G. Roberts, Jr. recognized that “[t]he compelled disclosure of signatory information on referendum petitions is subject to review under the First Amendment.”

Justices Samuel Alito, Stephen Breyer, Sonia Sotomayor, John Paul Stevens, and Antonin Scalia all authored concurring opinions.  Alito explained that this case was a facial challenge and that the Petitioners may be able to make out a cognizable as-applied challenge to the law on remand if they can show a realistic probability of harassment of petitioner signers.

Sotomayor emphasized the importance of initiatives and referenda in states’ political processes and appeared skeptical of any as-applied challenge.

Stevens wrote separately to emphasize that the disclosure requirement was a “neutral, nondiscriminatory policy” that did “not substantially burden any individual’s expression.”

Scalia emphasized that “a long history of practice shows that the First Amendment does not prohibit public disclosure.”

The Court’s lone dissenters was Justice Thomas, who wrote that “compelled disclosure of signed referendum and initiative petitions severely burdens those rights and chills citizen participation in the referendum process.”