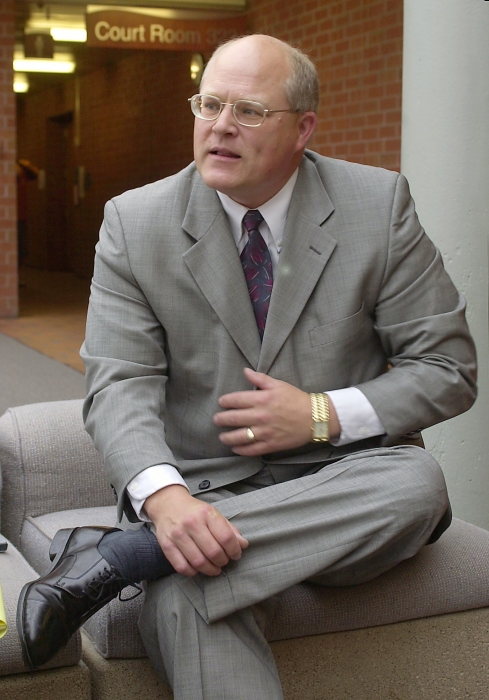 In this photo, attorney Greg Wersal talks about restrictions on judicial campaign speeches in Minnesota in 2005. Wersal, a former candidate for the Minnesota Supreme Court, successfully fought to remove restraints on what judicial candidates can say during election campaigns. The Supreme Court said prohibiting judicial candidates from discussing their views on controversial issues violated the First Amendment. (AP Photo/Janet Hostetter, used with permission from the Associated Press)

In Republican Party of Minnesota v. White, 536 U.S. 765 (2002), the Supreme Court held that rules of judicial conduct limiting what judicial candidates could say during electoral campaigns violated the First Amendment. Thus, judicial candidates are now able to discuss more widely the controversial issues on which they might rule.

Judicial campaign speech has been traditionally regulated to promote impartiality

Traditionally, campaign speeches or statements made by judges running for office have been subject to significant regulation in order to promote judicial impartiality.

In Minnesota, the state board that regulated judicial conduct had issued a rule — Canon 5 — that prevented candidates running for a judicial office from announcing their views on controversial issues that might come before their court. Canon 5 also prevented judicial candidates from seeking political party endorsements or affiliations, and from personally soliciting political contributions.

In 1998, Gregory Wersal, a candidate for the Minnesota Supreme Court, challenged the Canon 5 rules, contending that the announce, affiliation, and solicitation clauses violated his First Amendment free speech rights. In Republican Party of Minnesota v. White, the Court struck down the announce restriction — a provision that nine states had on their books.

Writing for the Court, Justice Antonin Scalia declared that the announce clause imposed a content-based restriction on the First Amendment that must survive strict scrutiny review. He rejected promoting impartiality as a constitutionally compelling justification for the announce clause.

He also maintained that trying to hold elections while limiting what can be discussed prevents candidates from discussing what elections are about — issues and policy. Thus, the announce clause violated the First Amendment, and the Court remanded the case to the lower courts for further deliberations.

A few years later, the Eighth Circuit Court of Appeals used similar reasoning in Republican Party of Minnesota v. White (2005), and held that the affiliation and solicitation rules also violated the First Amendment. Faced with the courts’ decisions in these cases, several lower courts struck down similar state restrictions.

The announce clause was based on the 1972 Code of Judicial Conduct of the American Bar Association (ABA). In 1990 the ABA issued its Model Code of Judicial Conduct and replaced the announce clause with the “commitments” clause, which generally prohibits judicial candidates from committing themselves on legal positions likely to come before their court. But some lower courts have determined that the Court’s reasoning in White also invalidates the commitments clause.

Others question whether the Court’s reasoning dooms another provision common to state judicial codes — the pledges and promises clause, which prohibits judicial candidates from pledging to act in certain ways in cases.

Although some observers laud the White decisions as providing more debate in judicial elections that will help voters make decisions, others see the potential for these type of elections to become more partisan and political.