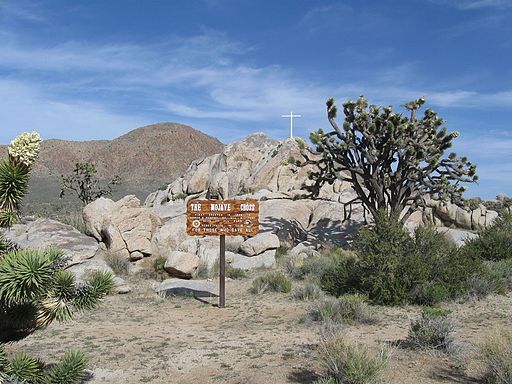 The small plot of land underneath the Mojave Cross in the Mojave National Preserve was transferred from the federal government to private owners. After the U.S. Supreme Court decision that the law instructing the transfer did not violate church and state, the cross was stolen. It was eventually found and re-installed on top of Sunrise Rock. (2013 photo by Larry Vredenburgh, CC BY-SA 3.0)

In Salazar v. Buono  559 U.S. 700 (2010), a sharply divided U.S. Supreme Court ruled 5-4 that the government could transfer land upon which a cross sat since 1934 to a private party without violating the Establishment Clause.

In 1934, private citizens placed a Latin cross in the Mojave Desert to honor American soldiers. The cross sits on federal land. The cross had been repaired many times through the years, including by private citizen Henry Sandoz in 1998.  Sandoz sought to transfer land with the federal government, such that Sandoz would receive the land upon which the cross sits.

Frank Buono, a retired Park Service employee, contended that the cross’ placement on federal land violates the Establishment Clause of the First Amendment.  He sued in a federal district court in California, seeking an injunction ordering the government to remove the cross.  The district court ruled that Buono had standing to sue and granted Buono’s request for injunctive relief.  The Ninth U.S. Circuit Court of Appeals affirmed.

On further appeal, the U.S. Supreme Court agreed that Buono had standing, but ruled that the lower courts failed to consider the full context behind Congress’ passage of the land-transfer law.

Kennedy also pointed out that the cross had stood on the land for nearly 70 years, a factor the lower courts did not factor enough into their analysis. Kennedy also reasoned that respect for a coordinate branch of government means that a court should not invalidate the law unless it is clearly unconstitutional.

Justice Samuel Alito concurred in the judgment, but wrote separately to say that he would not remand and would instead uphold the land-transfer statute from an Establishment Clause challenge.

Justice Antonin Scalia also wrote a concurring opinion, joined by Justice Clarence Thomas.  Scalia reasoned that Buono lacked standing to file the lawsuit, because “he failed to allege any actual or imminent injury.”

Justice John Paul Stevens, joined by Justices Ruth Bader Ginsburg and Sonia Sotomayor, dissented. Stevens believed that the cross represented an impermissible governmental endorsement of religion.  “Congress’ intent to preserve the display of the cross maintains the Government’s endorsement of the cross,” he wrote.

Justice Stephen Breyer wrote a separate dissent, reasoning that the case could be decided based on the law of injunctions.  Breyer would defer to the district court’s broad powers to craft an injunction to fit the remedy it deemed necessary.