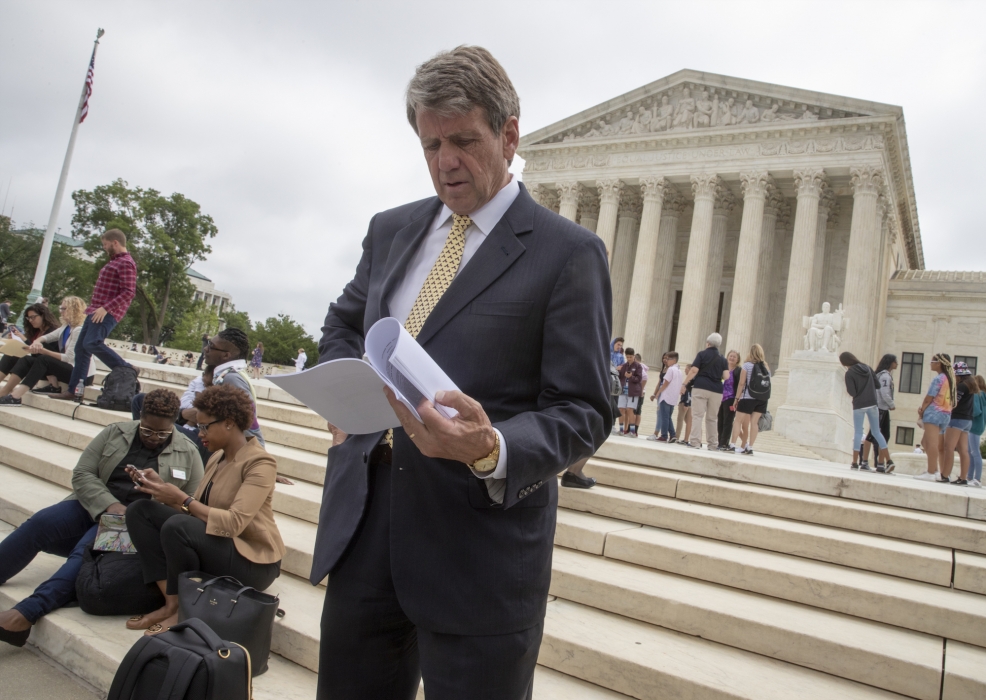 Michael Farris, CEO of the conservative Christian group Alliance Defending Freedom, looks at the decision in Masterpiece Cakeshop v. Colorado Civil Rights Commission in front of the Supreme Court, Monday, June 4, 2018 in Washington. The Supreme Court ruled for a Colorado baker who wouldn't make a wedding cake for a same-sex couple in a limited decision that leaves for another day the larger issue of whether a business can invoke religious objections to refuse service to gay and lesbian people. Alliance Defending Freedom represented Masterpiece Cakeshop. (AP Photo/J. Scott Applewhite)

The Alliance Defending Freedom (formerly the Alliance Defense Fund) is a conservative Christian organization founded in 1993 and dedicated to issues connected to religious freedom and family preservation.

It was for many years run by Alan Sears, a conservative Roman Catholic, although its main constituency appears to be evangelical Christians. Its website lists its founders as Sears as well as Bill Bright (of Campus Crusade for Christ), James Dobson (of Focus on the Family), D. James Kennedy (a noted evangelical preacher) and Larry Burkett (a Christian financial counselor).

Michael Farris became president of the organization in January 2017. Ferris was the founding president of Patrick Henry University and has long been active in the home school movement.

An article in the Legal Monitor Worldwide of May 12, 2014, reports that the organization has an annual budget of $40 million, a staff of 40-plus lawyers, and hundreds of others who are affiliated with it.

The organization helped successfully litigate the case of Reed v. Town of Gilbert (2015), in which the Supreme Court struck down a town’s sign ordinance that sought to restrict temporary signs displayed by the Good News Community Church. The organization has also been active, but less successful, in cases designed to recognize same-sex marriage.

The organization is particularly concerned about the so-called (Lyndon) Johnson Amendment, which is designed to stop pastors from tax-exempt churches form expressing political views in their sermons.  To this end, the organization has sponsored a Pulpit Freedom Sunday in which pastors were urged to speak about “the truth about marriage” (Legal Monitor).

The organization considers itself to be something of a counterweight to liberal civil rights and liberties organizations like the American Civil Liberties Union.

It most recently represented the Colorado baker who refused to design a cake for a same sex wedding in case that went to the Supreme Court, Masterpiece Cakeshop v. Colorado Civil Rights Commission (2018). In that case, the Court used the free exercise clause of the First Amendment to uphold the right of baker Jack Phillips.

John Vile is professor of political science and dean of the Honors College at Middle Tennessee State University. He is co-editor of the Encyclopedia of the First Amendment. This article was originally published in 2017, and updated in 2020.