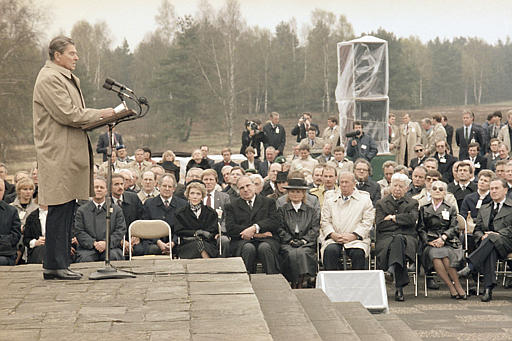 A threat to assassinate President Ronald Reagan while he was in Germany in May 1985 prompted the Secret Service to arrest a man who later claimed, after the charges had been dropped, that his constitutional rights had been violated, including First Amendment rights. The Supreme Court ruled that the Secret Service officers were entitled to qualified immunity in their actions because they had acted on sufficient probable cause. (In this May 5, 1985 photo, President Reagan speaks at the site of the former Bergen-Belsen Nazi concentration camp in West Germany. He was there to honor victims of World War II and the Holocaust and attend ceremonies commemorating the 40th anniversary of the end of World War II in Europe. AP Photo)

The Supreme Court has consistently ruled that the First Amendment does not protect individuals who are engaged in making “true threats.” The Court takes threats against the president with particular seriousness.

The case of Hunter v. Bryant, 502 U.S. 224 (1991) arose when James V. Bryant brought two photocopies of a handwritten letter to individuals at the University of Southern California. They referred to a plot to assassinate President Ronald Reagan during his trip to Germany in May 1985 by an individual identified as “Mr Image.”

After university officials contacted the Secret Service, two agents showed up to Bryant’s house, where he invited them to enter. After a rambling conversation in which he refused to answer questions about what he thought about the President and whether he sought to do him harm, they arrested him for making threats against the president.

Bryant sued Secret Service for arrest without a warrant

After the charges were dropped and he was released, he sued the Secret Service agents. The panel of the Ninth Circuit Court of Appeals ruled that the agents were entitled to qualified immunity for arresting Bryant without a warrant because when the arrest occurred, there were no clear guidelines that the agents had broken. The Court however denied qualified immunity on Bryant’s claim that they had arrested him without probable cause as required by the Fourth Amendment.

In its per curiam decision, the Supreme Court ruled that the agents should be so shielded if “a reasonable officer” could have believed the arrest to be lawful “in light of clearly established law and the information the officers possessed.” The Court further thought that the Ninth Circuit had improperly applied this standard by placing the issue of immunity in the hands of the jury rather than deciding it at the beginning of the trial and because the Court should have analyzed the issue based on what the settled law of the day rather than on subsequent speculation. Believing that the agents had acted on sufficient probable cause, the Court concluded that the agents were entitled to qualified immunity for their actions.

Justice Antonin Scalia concurred on the basis not that the Ninth Circuit had applied the wrong standard but on the basis that it had come to the wrong findings.

Justice John Paul Stevens dissented. Agreeing that “mere suspicion” provided justification for a number of prophylactic measures to protect presidential safety, he did not believe that the rambling letter and other evidence in this case was sufficient to constitute the probable cause that was required.

In a separate dissent, Justice Anthony Kennedy thought that the evidence was complicated enough that it should not be decided by summary disposition but required a full briefing and oral arguments.