By John R. Vile
Other articles in Issues Related to Speech, Press, Assembly, or Petition, Media 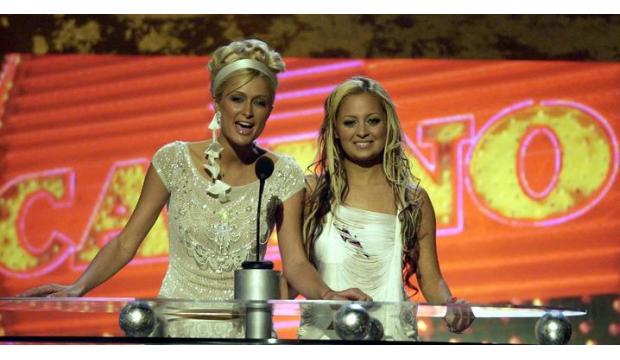 After a Supreme Court ruling in FCC v. Fox (2009) that the FCC had authority to regulate single utterances of indecent words or brief broadcasts of nudity, the FCC decided to issue sanctions for uses of the F-word on the Billboard Music Awards. Nicole Richie, right, used the word at the 2003 Billboard Music Awards. In 2012, the Supreme Court overturned the sanctions for vagueness. (AP Photo/Joe Cavaretta, used with permission from the Associated Press)

The Federal Communications Commission (FCC) has greater authority to regulate radio and television broadcasts than print media, largely because the former are more intrusive and reach larger audiences that often include children. The lead case establishing this authority is Federal Communications Commission v. Pacifica Foundation (1978), in which the Court sanctioned a radio station that broadcast a monologue by comedian George Carlin titled “Filthy Words.”

After a Supreme Court ruling in FCC v. Fox (2009) that the FCC had authority to regulate single utterances of indecent words or brief broadcasts of nudity, the FCC decided to issue sanctions for two uses of the F-word on the Billboard Music Awards and brief depictions of female breasts and buttocks on the ABC series "NYPD Blue."

In FCC v. Fox (2012), the Court overturned the FCC’s sanctions, but it did so not on First Amendment grounds but on the basis that the FCC policies were too vague to provide prior notice of wrongdoing on the part of those whom it had charged with this offense.

Since then, the FCC has opened its policies up for hearings and comments and dropped a large part of its backlog of complaints on the subject. In March 2015, however, it sought to fine a Roanoke television station $325,000 for a news report in which it briefly (and apparently inadvertently) portrayed an erect penis in a background shot designed to tell about a retired film star who was volunteering as an emergency medical technician.  The FCC based this fine on the belief that this was a patently offensive depiction of a sexual organ.

As of May 2017, neither this case nor the underlying issue has been resolved, but there is reason to question whether the FCC has demonstrated the requisite intent on the part of the broadcaster to make the charges stick (see Calvert et al., 2017).