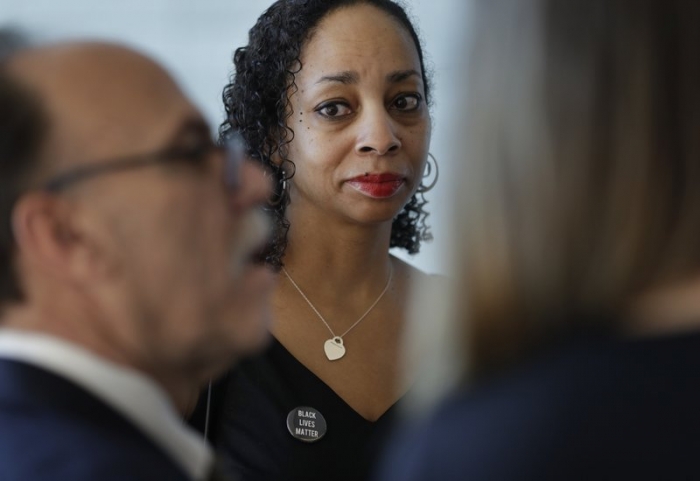 Erika Ballou, a deputy Clark County public defender, stands outside of a courtroom Thursday, Sept. 22, 2016, in Las Vegas. Ballou agreed to remove a "Black Lives Matter" pin in court after Clark County District Court Judge Douglas Herndon held firm and said he wouldn't allow displays of political viewpoints during proceedings in his courtroom. Ballou was in court to represent a client at a sentencing hearing in a domestic violence case. (AP Photo/John Locher, used with permission from the Associated Press)

Recent cases have raised the issue of whether a judge can prohibit attorneys from wearing pins or other symbols with a political message in the courtroom.

This issue was highlighted when in 2016, a Las Vegas judge ordered a defense attorney either to take off a “Black Lives Matter” pin that she wore on her lapel during a sentencing hearing or turn the case over to someone else.  In time, she was permitted to wear a black arm band similar to ones that court marshals had used to commemorate police officers who had been killed in the line of duty.

Symbolic speech of attorneys in a courtroom may be unsettled law

Professor Michael Kagan sees this as a matter of unsettled law.  He says that the case of Cohen v. California (1971), which involved wearing an item of clothing with an offensive message opposing the military draft, does not settled this issue.  He notes that Cohen wore his jacket in a courtroom corridor rather than in a courtroom and that the Court considered the case under a broader statute than one that involved courtroom conduct (2017, p. 127).

Moreover, although Kagan does not address it, the Supreme Court decision Carey, Warden v. Musladin (2006), 549 U.S. 70 (2006), upheld the right of family members, rather than attorneys, to wear buttons with the image of the victim thus implicating private rather than state action.

Kagan further examined three circuit court decisions, two in split decisions, which have reviewed this issue.  In these cases courts have respectively banned an attorney from wearing a button opposing an anti-LGBT initiative, banned an attorney from using provocative words in a case involving an anti-abortion protestor, and expounded on free speech in the court room while rejecting a Section 1983 action filed by an attorney who sought a libel judgment against a prosecutor who had spoken ill of him.

Judges cannot discriminate against symbolic speech based on viewpoint

Kagan is wary of excluding speech or symbols in court simply because they represent “a controversial speech exception.”

Drawing from cases involving the right of Christians groups in Good News Club v. Milford Central School (2001) and Rosenberger v. Rector and Visitors of the University of Virginia (1994), Kagan argues that “Because courts are limited public fora, the government (usually in the person of the judge) may regulate the form and subject matter of speech in courtrooms, but may not discriminate based on viewpoint” (pp. 133-134).  He further suggests that lawyers might have greater leeway in front of a judge than in front of a jury.