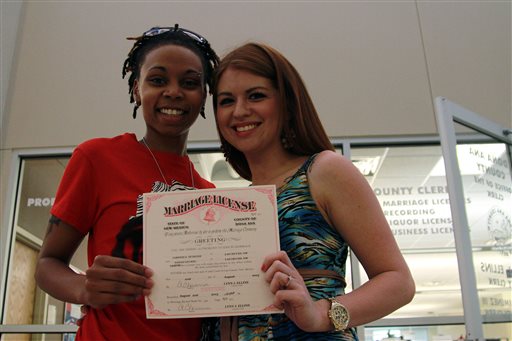 In Elane Photography v. Willock (2013), the New Mexico Supreme Court said an anti-discrimination law banning wedding photographers from discriminating on basis of sexual orientation did not violate the First Amendment. In this photo, Sarah Santos and Jamonica Hudgin pose for a picture with their marriage license in New Mexico in 2013 after the county clerk announced the county would marry same-sex couples. (AP Photo/Juan Carlos Llorca, used with permission from the Associated Press)

U.S. Supreme Court decisions on gay rights, most notably its decision in Obergefell v. Hodges, 576 U.S. ____ (2015) striking down state laws prohibiting gay marriage, have led to a number of cases in which owners of businesses have asserted their right to deny services to gay couples.

One of the most notable of these cases involved the claim by Elane Photography that forcing it to photograph gay weddings violated its First Amendment right not to speak and to the free exercise of religion. In Elane Photography v. Willock, 309 P.3d 53 (2013), the Supreme Court of New Mexico issued a decision that the U.S. Supreme Court subsequently refused to review.

The case arose when Elane Photography, which was owned by Elaine Huguenin, refused to provide photography services to Vanessa Willock and Misti Collinsworth who were planning a wedding. Willock filed a suit against the business claiming that it had violated the New Mexico Human Rights Act (NMHRA), which prohibited discrimination on the basis of sexual orientation. Lower state courts found that Elane Photography had indeed violated the law.

In a decision written by Justice Edward L. Chavez, from which there were no dissents, the Court rejected the idea that mandating service was a form of compelled speech. It thus distinguished this case from that of Wooley v. Maynard (1977), in which individuals were permitted to cover over a state-sanctioned slogan on license plates or Hurley v. Irish-American Gay, Lesbian & Bisexual Group of Boston (1995), in which it had allowed a private group to exclude a gay rights advocacy group from participating in a public parade that it sponsored. It thought the case was more analogous to Rumsfeld v. FAIR (2006), in which the Supreme Court had decided that the government could require law schools receiving governmental funds to open themselves to military recruiters on the same basis as non-military recruiters without therefore sending the message that it supported such recruiting.

Chavez denied that laws requiring public accommodation compelled speech. Noting that Elane Photography did have the First Amendment right to post a disclaimer on its website or advertising opposing same-sex marriage, the law merely required that businesses that dealt in commerce served customers without discrimination. Chavez thought it unlikely that members of the public would interpret the provision of services to a gay couple as an endorsement of gay marriage. Chavez further found “no exemption from antidiscrimination laws for creative or expressive professions.”

Assuming, without deciding, that a business had First Amendment free exercise rights, the Court further denied that the law interfered with these rights. Chavez observed that the NMHRA was a law of general applicability that applied both to the religious and irreligious. It further denied that Elane Photography’s exclusion of gay couples was protected under the New Mexico Religious Freedom Restoration Act observing that this law did not apply to legislative acts like the one at issue.

Justice Richard C. Bosson wrote a concurring opinion in which he observed that “religious convictions deserved respect,” but in which he said that believers sometimes had to “compromise, if only a little, to accommodate the contrasting values of others.”