By John R. Vile
Other articles in Controversial Works 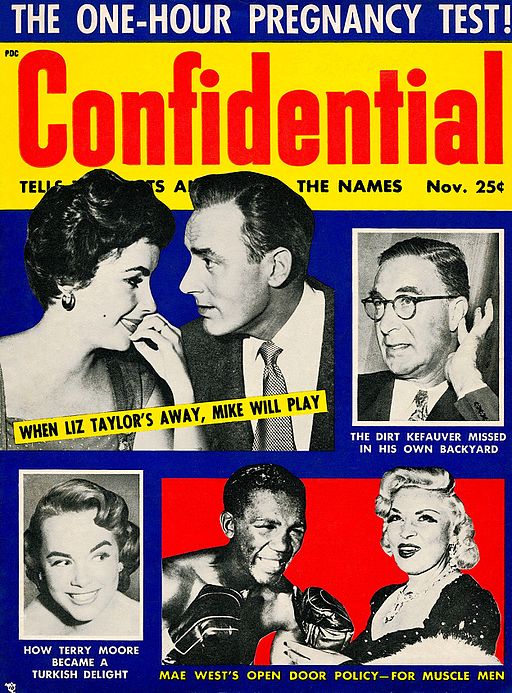 Confidential magazine “was the founder of tabloid, celebrity journalism in the United States, ” according to Professor Samantha Barbas.

Confidential was 'founder of tabloid journalism'

Directed by Robert Harrison, who was based in New York, the 1950s-era magazine focused on tearing down the carefully crafted images of Hollywood celebrities with salacious stories of infidelity, interracial affairs, and other matters. Stories were gathered from prostitutes, private detectives, and other informants.

Although the magazine was frequently reviled, it was one of the most popular publications of its time.  Harrison mixed in public service articles with his more salacious stories to combat charges that he was simply dishing out smut.  Harrison hired attorneys Daniel Ross and Albert DeStefano to guard against crossing the line into pornography or libel.

The film industry initially found that it could do little to protect itself. But the public became increasingly concerned about the possible tie between such magazines and the rise of juvenile delinquency and other social ills.

Existing cases like Near v. Minnesota (1931) had established a strong presumption against prior restraint of such publications.  This did not stop the post office from trying to ban the distribution of some issues from the mail, nor did it stop state and local authorities from attempting to close down retailers who distributed the magazine.  Although some celebrities sued, most found that it was easier to ignore the magazine than to do so, especially in cases where the stories had a factual foundation.

In 1957, California established the Senate Interim Committee on Collections Agencies (the Kraft Committee), which focused on the magazine’s methods for gathering information.  This provided the impetus for grand jury charges that the magazine was engaged in a conspiracy to publish obscenity and libel.

Barbas, who wrote "The Most Loved, Most Hated Magazine in America: The Rise and Demise of Confidential Magazine," says that the resulting trial was one of the most sensational of the decade.  Although the jury eventually deadlocked, beset by rising legal bills, Harrison eventually decided to settle for a plea bargain and a fine with the understanding that he would change the magazine’s format.  Soon thereafter, Harrison closed the magazine.

Barbas presents this case as a kind of cautionary tale about the manner in which publishers can be closed “not through official bans, postal restrictions, anti-scandal legislation, or criminal sanctions, but rather through the exhaustion and financial depletion” of the publisher (p. 189).

She further notes that “[w]ithin a few years of the Confidential trial, the entire apparatus of official censorship was crumbling” (p. 190).