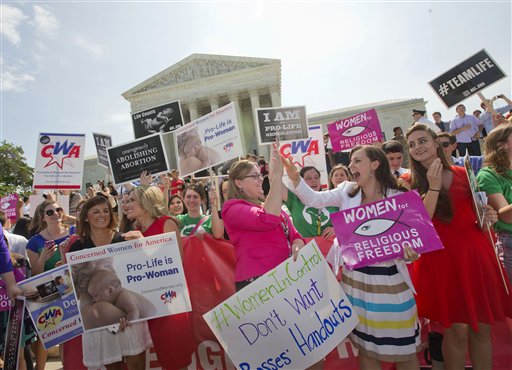 In recent years, evangelicals have devoted considerable attention to exempting religious groups from governmental regulations that they believe violate their conscience. They achieved a victory in Burwell v. Hobby Lobby Stores (2014), when the Supreme Court ruled that Hobby Lobby was exempt from requirements that would have required that they provide employees with forms of birth control that Hobby Lobby believed to be abortifacients. In this photo, pro-life demonstrators react to hearing the Supreme Court's decision on the Hobby Lobby case. (AP Photo/Pablo Martinez Monsivais, used with permission from the Associated Press)

The colonies that were to become the United States of America were largely settled by Protestant Christians, many of whom took their faith fairly seriously, and some of whom established state-endorsed churches in the new colonies.

As individuals who believed that individuals could interpret scriptures for themselves, Protestants encouraged literacy, and contributed to the democratization of America. Given such independence, it is not surprising that Protestants increasingly split into rival denominations and that denominations themselves often had theologically conservative and theologically liberal wings.

Those who would eventually be identified as evangelicals combined a strong Christian witness with belief in the authority of the Bible, the substitutionary atonement of Christ for the sins of the world, Biblical miracles, and orthodox Christian doctrines such as those that were articulated in the Apostles' or Nicene Creeds. These groups included the charismatic, holiness, and other traditions, many associated with African-Americans, which continue to provide considerable theological diversity.

Evangelicals re-emerged with Carter and Reagan

This split between conservatives and liberals was increasingly evident at the beginning of the 20th century, when conservatives largely rejected the idea of evolution and sought to ban its teaching from public schools. Although conservatives (who would soon be dubbed fundamentalists), won the Scopes decision, they faced a negative popular reaction, and many largely retreated from public life, only to be discovered when Jimmy Carter ran for president as a “born again” Christian in 1976, and Newsweek magazine declared 1977 as ”The Year of the Evangelical.”  Ronald Reagan and the Republican Party subsequently captured Evangelical voters by strong appeals to moral issues.

Evangelicals energized by moral decline and secularization of culture

Evangelicals, who had a strong presence on radio and television, were initially politically energized by what they regarded as the increasing secularization of culture. They were particularly troubled by Supreme Court decisions in Engel v. Vitale (1962) and Abington v. Schempp (1963), limiting devotional exercises in public schools on the basis of the establishment clause; many evangelicals favored a constitutional amendment to overturn these decisions.

Others were concerned with what they perceived to be the nation’s moral decline as represented in cases like Roe v. Wade (1973), which liberalized abortion laws, and a myriad of decisions that liberalized the publication of obscenity and pornography. Rev. Jerry Falwell unsuccessfully sued Larry Flynt, publisher of Hustler magazine, for intentional infliction of emotional distress resulting from a defamatory parody that he published.

Similarly, many evangelicals sought unsuccessfully to limit gay marriage, which they thought to be contrary to the Biblical view of the subject.  On many of these issues, Evangelicals sought alliances with conservative Roman Catholics, members of the Church of Latter-Day Saints (Mormons), and even Jewish groups.

Jerry Falwell, who founded the Moral Majority, and Pat Robertson, an evangelical television host who founded the Christian Broadcasting Network, were among those who rallied voters by appeals to such right-wing causes. Evangelical lawyers increasingly began to view their own profession as a calling that could aid the cause, and a host of legal advocacy groups were formed, including the American Center for Law and Justice, the Christian Legal Society, the Rutherford Society, and others.

Unlike the less-orthodox Jehovah’s Witnesses, who had experienced remarkable success in achieving protection for their own evangelistic outreach, evangelicals were not generally as isolated from the cultural mainstream, although concerns over separation of church and state, which many evangelical denominations shared, sometimes blocked their policy objectives.

By shifting their primary emphasis from the free exercise of religion to freedom of speech, evangelical lawyers were remarkably successful in a number of high-profile cases.

Most notably, they won the right to access public university facilities in Widmar v. Vincent (1981) and the right for religious student groups to obtain funding from student fees in Rosenberger v. Rectors and Visitors of the University of Virginia (1995).  Evangelicals helped push for the adoption of the Equal Access Act of 1984.

They also spearheaded efforts that led to the decision in Lamb’s Chapel v. Center Moriches Union Free School District (1993), which granted churches equal access to school facilities after hours, evangelicals were also influential in getting adoption of the Religious Freedom Restoration Act of 1993 and the Religious Land Use and Institutionalized Persons Act of 2000.

In Christian Legal Society v. Martinez (2011) evangelicals suffered something of a setback when the Supreme Court allowed Hastings College of Law to exclude evangelical groups that did not open its leadership to nonbelievers. Lisa Shaw Roy suggests that this decision might prompt evangelicals to reconsider using greater reliance on the free exercise clause rather than the free speech provisions of the First Amendment (2011).

In recent years, evangelicals have devoted considerable attention to exempting religious groups from governmental regulations that they believe violate their conscience.

They achieved a victory in Burwell v. Hobby Lobby Stores (2014), when the Supreme Court ruled that closely held for-profit businesses were exempt from requirements under the Affordable Care Act that would have required that they provide employees with forms of birth control that they believed to be abortifacients.

Evangelicals have founded a number of colleges and universities including Liberty University (Falwell), Regent University (Robertson), and Patrick Henry University (Michael Farris). These institutions have in turn been strong advocates for private schools and for homeschooling.