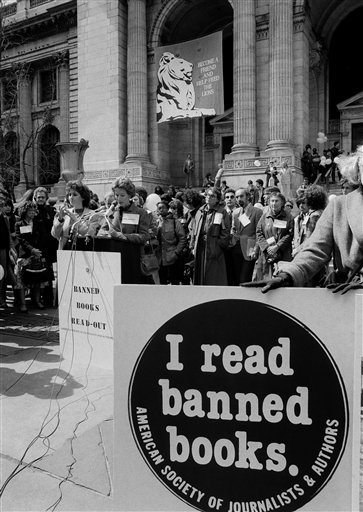 The federal appeals court decision in Minarcini v. Strongsville City School District (6th Cir. 1976) reaffirmed the principle that school board officials do not have unfettered discretion to remove books from library shelves simply because they find the books objectionable. In this photo, Gail Sheehy, author of "Passages," at podium, right, reads during the "First Banned Books Read Out" in New York, April 1, 1982. The rally protested censorship by school and public libraries of certain books under pressure from right wing religious groups. (AP Photo/Carlos Rene Perez, used with permission from the Associated Press)

The federal appeals court decision in Minarcini v. Strongsville City School District, 541 F.2d 577 (6th Cir. 1976), reaffirmed the principle that school board officials do not have unfettered discretion to remove books from library shelves simply because they find the books objectionable.

Strongsville school board was sued for removing books from library shelves

The controversy arose in Strongsville, Ohio, after local school board members voted to remove Catch 22 by Joseph Heller and two books by Kurt Vonnegut from library shelves and the curriculum. Five students, through their parents, then sued the school board, claiming a violation of their First Amendment rights.

The Sixth Circuit Court of Appeals rejected the claim that the school board could not remove books from the curriculum. According to the appeals court, Ohio law empowered local boards of education to determine what books would be used in classrooms. The Sixth Circuit found “no federal constitutional violation in this Board’s exercise of curriculum and textbook control as empowered by the Ohio statute.”

However, the appeals court ruled in favor of the student plaintiffs in the removal of the books from library shelves. “A library is a storehouse of knowledge,” the court wrote. “Here we are concerned with the right of students to receive information which they and their teachers desire them to have.” The appeals court determined that the removal of library books clearly raised First Amendment concerns.

In 1982 the U.S. Supreme Court employed a similar rationale in its decision in Board of Education, Island Trees Union Free School District v. Pico (1982) on the removal of library books.