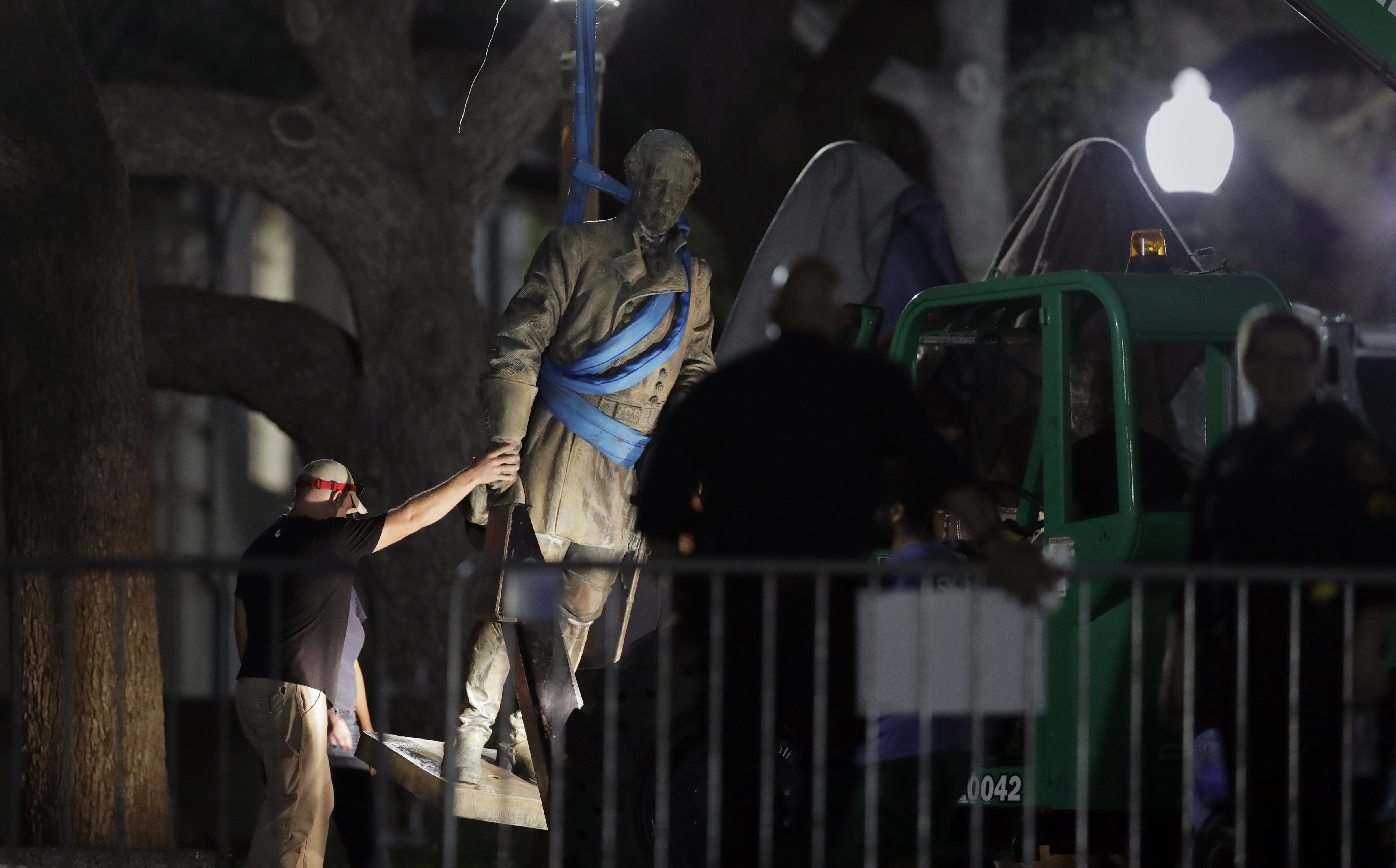 A statue of Confederate Gen. Robert E. Lee is removed from the University of Texas campus, early Monday morning, Aug. 21, 2017, in Austin, Texas. University of Texas President Greg Fenves ordered the immediate removal of statues of Robert E. Lee and other prominent Confederate figures from a main area of campus, saying such monuments have become "symbols of modern white supremacy and neo-Nazism." (AP Photo/Eric Gay, used with permission from The Associated Press)

Civilizations build monuments to honor leaders and heroes. They may celebrate local or national heroes, or seek to bind an empire (as do the many statues throughout the British Commonwealth to Queen Victoria).

Monuments have occasionally been destroyed due to public sentiment

On occasion, popular sentiments will result in the destruction of monuments, as when the statue of King George III was destroyed after the Declaration of Independence was read in New York City. This is hardly an American phenomenon. Russians destroyed many statues of Lenin and Stalin after the fall of the Iron Curtain, and Iraqis destroyed statues of Saddam Hussein after American troops captured Baghdad.

One complexity is that statues clearly commemorate the values of the time and place where they were constructed and thus might illumine the history of such periods.  Moreover, individuals may react differently to statues depending on their region, their race, or their historical understandings.

In a 2017 press conference in which he defended Confederate monuments, President Donald Trump observed that early presidents, including George Washington and Thomas Jefferson, were slaveholders, and yet most people do not think that their statues should be dismantled.

Critics noted that such men (in contrast to Confederate leaders and generals) had worked to establish, rather than to destroy the nation.  They might further note that the historic sites of the homes of such presidents are increasingly weaving the stories of their slaves into the narratives of their lives.

Some see Confederate statues as honoring past; others as an affront to freedom

Hundreds of southern towns, which have long renounced the institution of slavery, have generic representations of Confederate soldiers in town parks on town squares.  For many, they recognize the heroic sacrifice of ancestors for what they believed, which may have included anything from a desire to defend their homes, to a defense of states’ rights, and issues other than the perpetuation of slavery. Some may celebrate idealized versions of Confederate leaders who never actually existed or may recognize such leaders (General Robert E. Lee, for example) for attempting to heal the nation after the Civil War ended.

Many of these statues to Confederate leaders were erected from 1890 to 1925, a time which marked the birth of Jim Crow segregation laws throughout the South, the suppression of black voting, and the rise of increased violence against blacks.  African-Americans who approached such statues on public property, especially in front of courthouses, may well have questioned whether they could expect the “equal protection of the laws” promised by the Fourteenth Amendment to the U.S. Constitution.  Similarly, African-American children attending a school named after a Confederate General, or a mascot designated as a rebel, might well wonder whether they will be equally accepted as white students.

Individuals are, of course, free under the First Amendment to construct memorials on private property.

There is a large statue to Confederate General Nathan Bedford Forrest in Nashville, Tennessee.  Forrest, a Tennessean who was generally regarded as a great tactician, also was the first Grand Wizard of the Ku Klux Klan.  While the private monument remains, there is renewed debate about whether a bust of General Forrest in the State Capitol Building (public property) should be retained. Under the government speech doctrine, the government can display or not display certain monuments. However, the government may have to follow certain legally specified procedures before it can remove monuments.

The issue came to a head in August 2017 when the city of Charlottesville, Virginia, home to the University of Virginia, which was founded by Thomas Jefferson, decided to remove a statue of General Robert E. Lee from a public park.  This decision led to a Friday night torch-light parade through the grounds of the University of Virginia by Neo-Nazis and members of the alt-right, who while ostensibly there to protest the statue’s removal (and who had a First Amendment right to protest), chanted Nazi and anti-Semitic slogans.

The next day, demonstrators and counter-protestors confronted one another in downtown Charlottesville, and one of the demonstrators, who appears to have Nazi sympathies, plowed his car through a group of counter-demonstrators resulting in the death of Heather Heyer.

President Donald Trump subsequently held a press conference in which he appeared to be criticizing all sides equally (Shear and Haberman, 2017).  This sparked further outrage and charges that he was morally equating those who had been violent and those who were not.  Protestors subsequently demolished a Confederate statue in Durham, North Carolina, and the mayor of Baltimore, Maryland ordered the removal of a number of Confederate memorials in the city.

Other proposed solutions have included simply leaving the statues as monuments to history, moving them to parks or museums where they can be placed in historical context, or adding disclaimers or other monuments (to, for example, former slaves) that would provide a wider context.

The case of Walker v. Texas Division, Sons of Confederate Veterans (2015) established that a state does not have to make its license plates a forum for the display of Confederate flags, but it did not mandate that they prevent it under the government speech doctrine. For now, at least, most such decisions are likely to be made at the state or local level.

Christopher Ingraham reports that Statuary Hall in the U.S. Capitol (where each state has designated two monuments) contains 12 statues of Confederate leaders, including Robert E. Lee and Jefferson Davis, and only four of African-Americans.