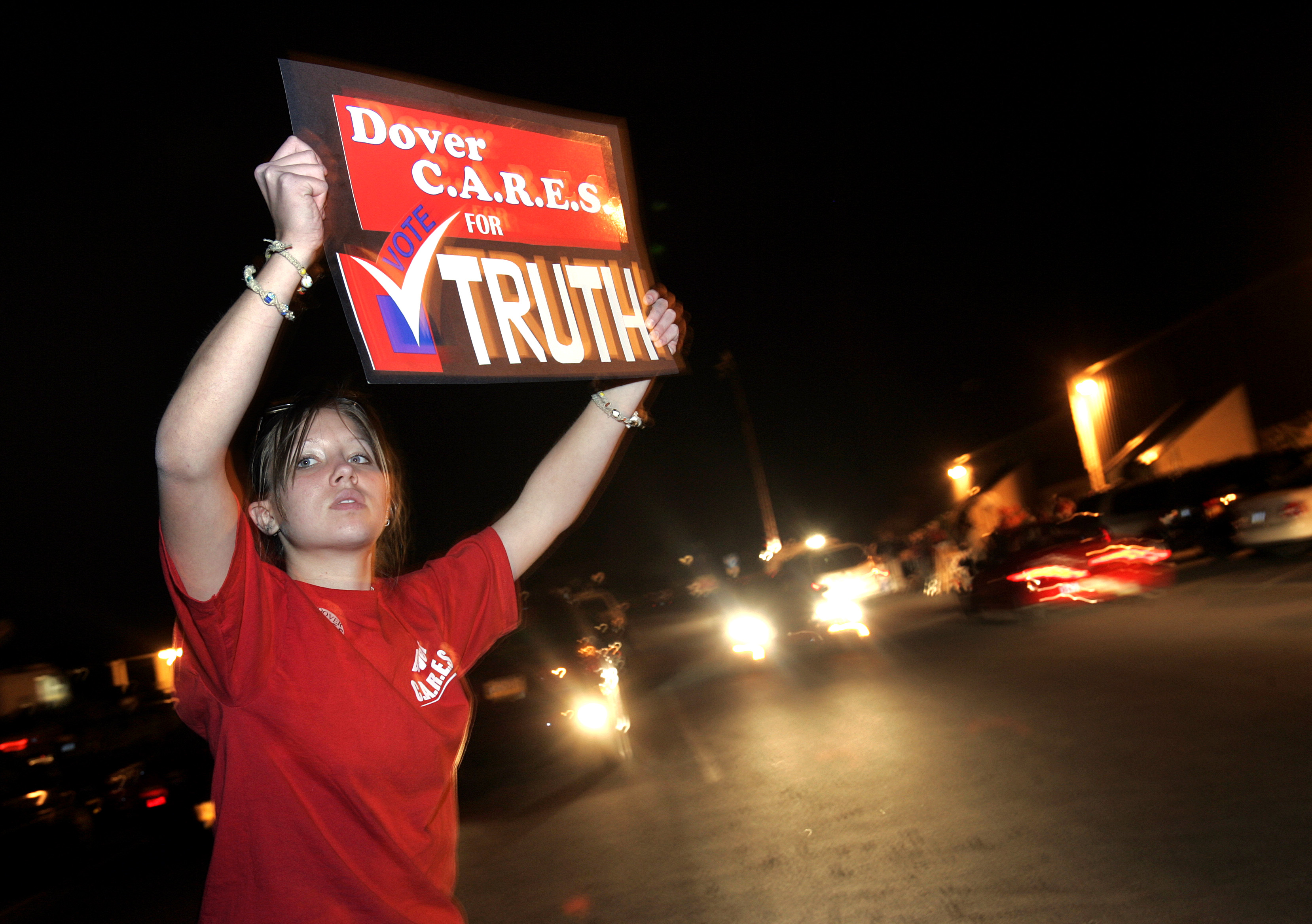 Megan Kitzmiller, a Dover Area High School senior and daughter of Tammy Kitzmiller, holds a sign on Nov. 8, 2005, supporting the Dover Citizens Actively Reviewing Educational Strategies (Dover C.A.R.E.S.) to cars pulling into a polling place in Dover, Pa. The debate over teaching evolution in her rural school district became an issue in the school board election after the board adopted a policy that all ninth-grade biology students hear about "intelligent design" at the start of the course. Megan's mother, along with seven other Dover families, sued the school district, alleging that the policy violates the constitutional separation of church and state. A federal judge eventually agreed. (AP Photo/Carolyn Kaster, used with permission from The Associated Press)

One of the most famous American trials of the 20th century was the Scopes Monkey Trial (1925), involving a Tennessee law designed to limit the teaching of evolution in public schools.

In Epperson v. Arkansas (1968), the U.S. Supreme Court struck down a similar prohibition, after which states adopted laws for “balanced treatment” of the subject by including a requirement to teach “creation science.”  In Edwards v. Aguillard (1987), the Court determined that this requirement violated the Establishment Clause of the First Amendment.

Looking for ways to evade this decision, some opponents of teaching evolution shifted to an emphasis on introducing “Intelligent Design” into the curriculum.  Like creation science, it argued that scientific evidence could not sufficiently account for the development of life, and that it therefore pointed to the presence of a Creator.

One of the school districts that sought to introduce its students to such intelligent design was the Dover Area School District in York County, Pennsylvania.  The board adopted the following policy, which administrators (biology teachers had refused to participate) read to each ninth grade biology class the following statements:

This action was subsequently challenged in a U.S. District Court that held voluminous hearings involving experts in the field over a three-month period.

It issued a decision in this case, Kitzmiller v. Dover Area School District, 400 F. Supp. 2d 707 (M.D. Pa. 2005), in which it decided that the new approach, like the ones the Court had rejected earlier, also violated the Establishment Clause as applied to the states via the due process clause of the Fourteenth Amendment.  Judge John E. Jones III, a Republican appointed by George W. Bush, crafted the decision in the case, which resulted in a permanent injunction against the requirement.

Jones’ decision centered in large part on what tests to apply to this case.  He ultimately decided that the practice violated both the so-called “Endorsement Test,” which is most frequently associated with Justice Sandra Day O’Connor, and the three-part Lemon Test.

In applying the endorsement test, Jones reviewed public records as to why the school board had done what it did and concluded that either a reasonable student or a reasonable adult would conclude that it had done so as a way of endorsing the religious belief that God had created individual species.  Jones noted that prior cases striking down the teaching of Creation Science had concluded that it was not empirical and that it rested on assumptions that were “neither testable nor falsifiable.”

Essentially tracing the theory of Intelligent Design to the earlier Creationism movement, Jones found that it was designed to lead students to the view that a Creator had directed the process of organic development.

In reviewing the statements that the school board mandated to ninth grade students, Jones concluded that they would reasonably view the statement as an “Official Endorsement of Religion.”  Jones noted that this was the only aspect of the curriculum in which the school board had issued such a mandate.  Moreover, he thought the statement forced children into what another judge had labeled as “a contrived dualism” in which students had to choose between two views of the origins and development of live, with no middle ground.

Moving from the likely perception of an objective student to an objective adult, Judge Jones noted that public hearings on the subject had been filled with religious references.  These had further been reflected in letters to, and editorials in, the local newspapers.  School board members, who are not subject to a religious test, had even questioned whether board members who voted against the measure were born-again believers.

After examining the testimony of witnesses, Jones concluded that “while ID arguments may be true, a proposition on which the Court takes no position, ID is not science.”  He explained that the theory violated scientific method “by invoking and permitting supernatural causation”; that the “argument of irreducible complexity, central to ID, employs the same flawed and illogical contrived dualism that doomed creation science in the 1980’s”; and that its attacks on evolution “have been refuted by the scientific community.” He further said “that ID has failed to gain acceptance in the scientific community, it has not generated peer-reviewed publications, nor has it been the subject of testing and research.”  He further believed that ID advocates had ignored much of the evidence that could explain apparent gaps.

After finding that either a reasonable student or adult would thus consider the school board policy to be an endorsement of a particular religious view that thus violated the Establishment clause, Jones further applied the Lemon Test, which the Court had developed in Lemon v. Kurtzman (1971) to deal with Establishment Clause cases.

Despite what he considered to be false statements on the part of some of the supporters of Intelligent Design, Jones found that members of the school board had clearly expressed a religious purpose for introducing Intelligent Design into the curriculum (the first prong of the Lemon Test) and arranged for the provision of an ID text Of Pandas and People into the classrooms. Jones further found that the Board’s action further violated the second prong of the Lemon Test (the Effect Test) because it was designed specifically to bolster alternate religious explanations of the origin and development of life.

Anticipating criticism, Judge Jones denied that he was an “activist judge.”  He opined that “this case came to us as the result of the activism of an ill-informed faction on a school board, aided by a national public interest law firm eager to find a constitutional test case on ID, who in combination drove the Board to adopt an imprudent and ultimately unconstitutional policy.”