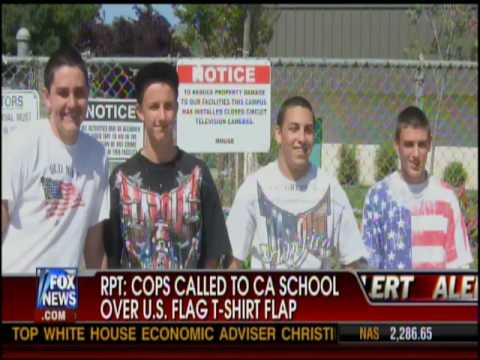 A circuit court upheld a California school district's right to prohibit students from wearing American t-shirts on Cinco De Mayo because there was a reasonable expectation that the shirts would cause disruption. (Photo from YouTube image from a Fox News report)

The school had experienced tension between Caucasians and Hispanics at the school and there was tension during last school year on Cinco de Mayo. The assistant principal ordered the students to remove their T-shirts.

Later, the students filed a lawsuit, alleging that their First Amendment free speech rights had been violated. A federal district court dismissed their lawsuit.

On appeal, the 9th Circuit affirmed, finding that under Tinker v. Des Moines Independent Community School District (1969), the assistant principal could reasonably forecast that the continued wearing of those T-shirts could cause a substantial disruption at school.

According to the panel, there was evidence of impending violence and the school officials acted reasonably in the name of student safety.

The students petitioned for full panel review before the 9th Circuit.

According to O’Scannlain, the students wearing the American flag T-shirts should not have their free-speech rights limited by the behavior of other students who don’t like their speech. He wrote that “the panel opens the door to the suppression of any viewpoint opposed by a vocal and violent band of students.”

The students petitioned for review to the U.S. Supreme Court, but the high court denied review in March 2015.