By Emilie S. Kraft
Other articles in Issues Related to Speech, Press, Assembly, or Petition, Media, Freedom of the Press issues and topics 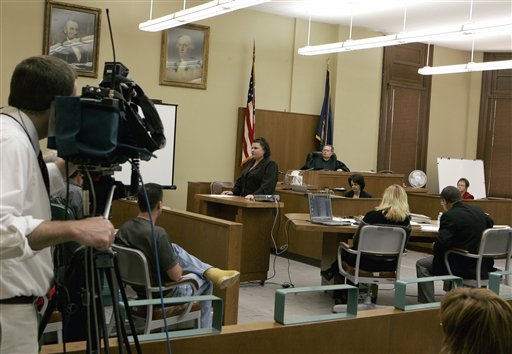 The Supreme Court first held that the press and the public had a First Amendment right to attend criminal trials in 1980. The right is considered presumptive, but not absolute. The Court has not directly addressed whether the First Amendment right of access extends to the use of audiovisual devices in the courtroom, although states can make their own laws on this issue. This photo shows cameras in a Nebraska criminal trial for the first time in 2008. (AP Photo/Nati Harnik, used with permission from The Associated Press.)

The public and the press have a qualified First Amendment right of access to court proceedings and records.

Although the First Amendment does not explicitly mention the right of access, the Supreme Court has held that the right to attend criminal proceedings is implicit in freedom of speech and serves an important function in a democratic society by enhancing trial fairness and its appearance.

The Court first held that the press and the public had a First Amendment right to attend criminal trials in Richmond Newspapers, Inc. v. Virginia (1980).

As the Court pointed out in Douglas Oil Company v. Petrol Stops Northwest (1979), the right does not cover grand jury proceedings because “the proper functioning of our grand jury system depends upon [its] secrecy” to protect witnesses and those exonerated by the grand jury.

In Richmond Newspapers and its progeny, the Supreme Court used a two-part test to determine when the right of access should be granted for a particular proceeding.

If a proceeding qualifies under these tests, a First Amendment right of public access attaches. That right is not, however, absolute. It is only a presumption of access. The presumption may be overcome by a showing that closing the proceeding preserves a higher interest and that the closure is narrowly tailored to serve that interest.

Depending upon the circumstances, proceedings might be closed to protect a defendant’s right to a fair trial by an impartial jury or to protect privacy interests of witnesses, jurors, or victims.

Before closing a proceeding, a trial court must exhaust all reasonable alternatives to the closure and make specific findings detailing the need for it.

The Supreme Court has never recognized a right of access to civil proceedings, although several state and lower federal courts have. Most have recognized that the openness of civil trials is also necessary to promote free participation and communication in a democratic society.

Although the state and lower federal courts have held that a presumption of openness generally applies in the civil context as well as the criminal, civil proceedings may be closed for a variety of reasons, including the need to protect the parties’ privacy, confidential business information, or trade secrets.

The Supreme Court also has not recognized a right of public access to juvenile proceedings. Such proceedings have traditionally been closed to the public and remain so. Some state courts, however, have allowed access to certain juvenile proceedings, particularly if the defendant is charged with murder or another serious felony. These courts generally employ a balancing test that weighs the public’s interest against those of the child.

First Amendment doesn't extend to filming in the courtroom

Although the Supreme Court has not yet directly addressed the issue, most federal district and circuit courts have held that the First Amendment right of access does not extend to audiovisual devices in the courtroom.

In other words, although the public has a right to attend trials, it does not have a right to watch them on television. Many state courts, however, routinely allow television cameras to tape and televise proceedings, although the trial judge maintains broad discretion to set rules for recordings to ensure that they do not interfere with the defendant’s right to a fair trial or disrupt the proceedings.

The Reporters Committee for Freedom of the Press publishes the Open Courts Compendium as a general guide to court access issues, with specific additional information for each state and federal circuit.