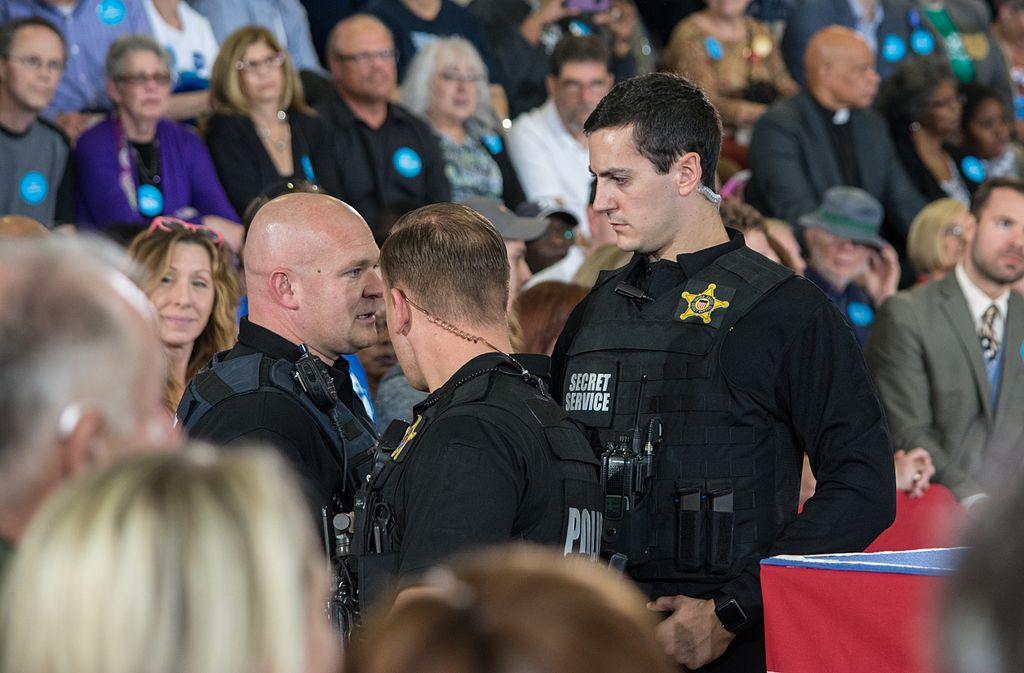 Uniformed Secret Service agents in Akron, Ohio on Oct. 3, 2016. The U.S. Supreme Court has ruled many times that government officials are entitled to qualified immunity in First Amendment lawsuits, meaning they might not face liability for violating someone's constitutional rights if the law was not settled or known at the time of the conduct in question. In Wood v. Moss in 2014, Secret Service agents who removed protestors away from President George W. Bush were granted qualified immunity against a challenge that the protestors First Amendment rights of speech were violated. (Photo by Tim Evanson, CC by SA-2.0)

Qualified immunity is a doctrine that shields government officials from liability unless they violated clearly established statutory or constitutional law.

Under this doctrine, a government officials could violate a person’s First Amendment rights, but not face liability because the law was not settled or known at the time the official engaged in such conduct.

The idea behind qualified immunity is that society should not punish a government official unless that official knew or should have known what he or she was doing was unlawful.  Furthermore, the doctrine advances the idea that we do not want to chill the conduct of government officials who may be leery of acting in certain situations for fear of being sued.

In Pearson v. Callahan (2009), a Fourth Amendment search and seizure case, the Supreme Court provided that reviewing federal district courts could apply the “clearly established prong” first without deciding whether or not there was a violation of a constitutional right.  Some legal commentators have criticized this approach, pointing out that it can slow the growth of constitutional law, because courts can bypass the first inquiry of whether there has been a constitutional violation.

The U.S. Supreme Court has determined in many cases that government officials were entitled to qualified immunity in First Amendment cases.

For example, in Wood v. Moss (2014), the Court ruled that Secret Service agents were entitled to qualified immunity when they removed protestors away from then President George W. Bush.

Similarly, in Reichle v. Howards (2012), the Court ruled that Secret Service agents were entitled to qualified immunity from a lawsuit alleging a retaliatory arrest.

Another example is Morse v. Frederick (2007) in which the Court ruled that a high school principal was entitled to qualified immunity for suspending a public high school student for displaying a “Bong Hits 4 Jesus” sign at a school-sanctioned event.

But the extent of qualified immunity in free speech cases has sometimes raised questions. In 2021, the U.S. Supreme Court declined to review a free-speech case in which the 8th U.S. Circuit Court of Appeals granted qualified immunity to college officials at Arkansas State University. Justice Clarence Thomas wrote in a statement with the denial to hear Hoggard v. Rhodes (2021) that he thought the doctrine of qualified immunity needed to be reevaluated or the "one-size-fits-all" approach examined. He argued that school officials who have plenty of time to make "calculated decisions" about student speech rights were different from police officers who have to make split-second decisions that might infringe on constitutional speech rights.