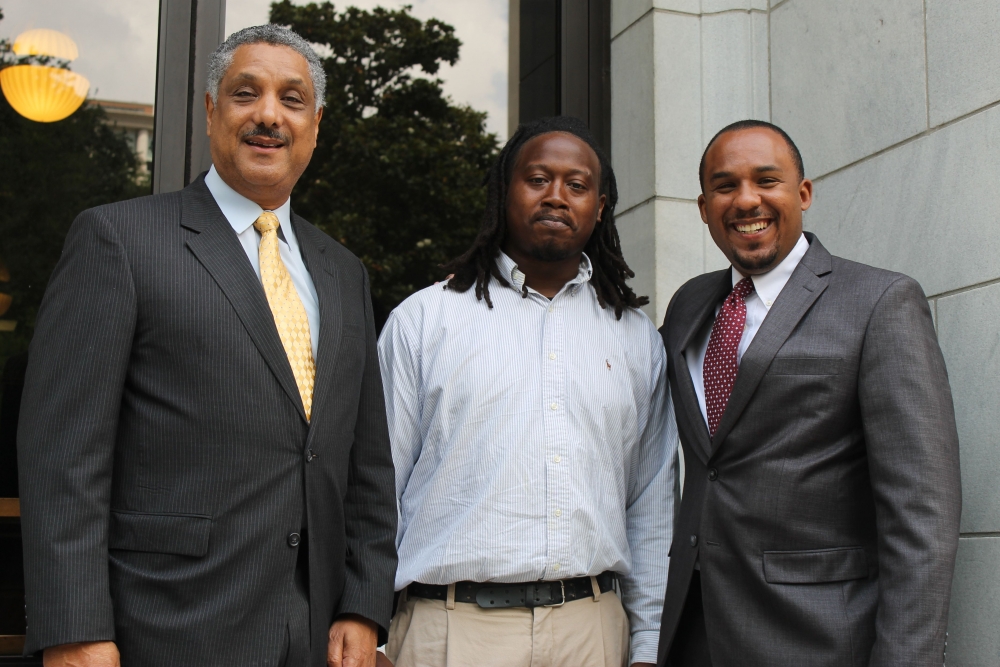 Former Mississippi high school rapper Taylor Bell is flanked by his attorneys, Wilbur Colom, left, and Scott Colom, right, after the oral argument in his First Amendment case before federal appeals judges in New Orleans. The 5th U.S. Circuit Court of Appeals eventually determined that a rap video Bell made off-campus was threatening toward teachers and substantially distruptive, upholding his suspension. (Photo Credit/Frank LoMonte, with permission to republish by Frank LoMonte)

In this 2012 decision, a divided federal appeals court ruled that Mississippi school officials did not violate the First Amendment when they punished a high school student for posting a rap recording on Facebook and YouTube that criticized two Caucasian high school football coaches for allegedly sexually inappropriate comments toward African-American female students.

The appeals court majority reasoned that the song, which featured profanity and arguably threatening language, could be considered substantially disruptive to the school environment.

Student Taylor Bell, through his persona T-Bizzle, posted his recording after hearing several female students complain about the behavior of the two coaches. The song featured language such as “betta watch your back/I’m a serve this nigga, like I serve the junkies with some crack.”

One of the coach’s wives heard the song and contacted her husband, who reported it to an assistant principal. School officials sent Bell home that day. Later, the school superintendent suspended Bell for “alleged threatening intimidation and/or harassment of one or more school teachers.”

After a hearing, a disciplinary committee recommended to the school board that Bell face a seven-day suspension and be placed in an alternative school for the remainder of the grading period. The school board upheld the punishment.

Panel ruled in favor of Bell

Bell appealed to the 5th U.S. Circuit Court of Appeals. A divided three-judge panel of the 5th Circuit reversed and ruled in favor of Bell. The panel majority determined that school officials violated Bell’s First Amendment rights. The majority reasoned that the rap song was not a true threat or substantially disruptive under Tinker v. Des Moines Independent Community School District (1969).

However, the school board successfully sought en banc review. The en banc majority determined that school officials “reasonably could find Bell’s rap recording threatened, harassed, and intimidated the teachers; and a substantial disruption reasonably could have been forecast, as a matter of law.” The majority emphasized increased concerns over school violence. The majority also reasoned that Tinker applied to Bell’s off-campus recording, because Bell intentionally directed his speech toward the school community.

Four justices wrote separate dissenting opinions. The two most substantive dissents were by Judge James L. Dennis and Judge Edward Prado. Dennis, who had authored the majority opinion at the three-judge panel level, wrote the most comprehensive dissent. He termed Bell a “student whistleblower,”  adding that four female students had filed affidavits detailing incidents of sexual harassment by the coaches.

Judge Edward Prado’s dissent emphasized the lack of uniformity in student online-speech cases. He believed that the majority had stretched precedent to apply it to “purely off-campus speech.” He warned that Tinker applied to student speech that takes place on campus and should be not reflexively applied to off-campus speech. He wrote that the “difficult issue of off-campus online speech will need to be addressed by the Supreme Court.”