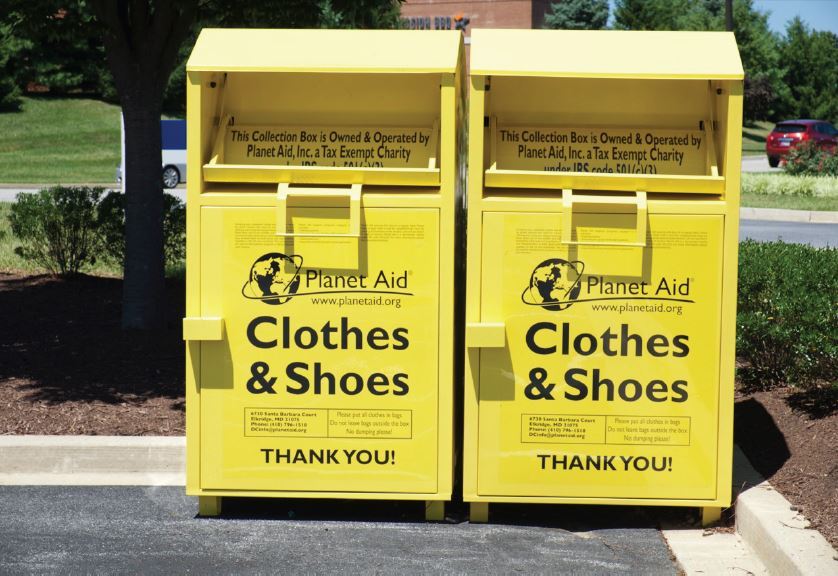 The charity Planet Aid included this image of its donation bins in a Nov. 17, 2017, lawsuit against Baltimore County to try to block zoning regulations. Planet Aid won a case in Michigan in which an ordinance sought to remove all charitable bins.

The dispute began shortly after Planet Aid, which solicits clothing and shoes donations through its bins, placed two bins in two locations with the permission of the property owners. City officials confiscated the bins and later passed an ordinance prohibiting unattended, charitable donation bins. The ordinance read: “No person, business or other entity shall place, use or allow the installation of a donation box within the City of St. Johns.”

Planet Aid sued, alleging a violation of its First Amendment rights. A federal district court granted the organization a preliminary injunction preventing the city from enforcing the law. The city appealed to the Sixth U.S. Court of Appeals, arguing that the ordinance was necessary to preserve aesthetics and to prevent nuisances.

The Sixth Circuit explained that the donation bids were a form of charitable solicitation entitled to significant  First Amendment protections under the U.S. Supreme Court’s decision in Village of Schaumburg v. Citizens for a Better Environment (1980).

Next, the panel analyzed whether the ordinance discriminated against the group’s speech based on content. According to the Sixth Circuit, the ordinance is content based, because it banned only the unattended bins of charitable organizations not all unattended receptacles, such as “dumpsters, receptacles at recycling centers, and public and private trash cans.”

The Sixth Circuit also ruled that even if the city had a compelling interest in aesthetics, the ordinance was not narrowly tailored. “The ordinance preemptively and prophylactically prevents all charities from operating outdoor, unattended donation bins within the City in the interest of aesthetics and preventing blight,” the appeals court wrote. “This implies, without any evidence, that charities would be negligent in failing to conduct timely pickups of donated goods, in maintaining the appearance of the bins, etc. Further, it assumes that lesser, content neutral restrictions such as requiring weekly or bi-weekly pickups or inspections of all outdoor receptacles would be ineffective.”

The appeals court concluded that the lower court was correct in issuing a preliminary injunction prohibiting enforcement of the ordinance.