Department of Justice v. Reporters Committee For Freedom of the Press (1989)

By John R. Vile
Related cases in Privacy, Freedom of the Press 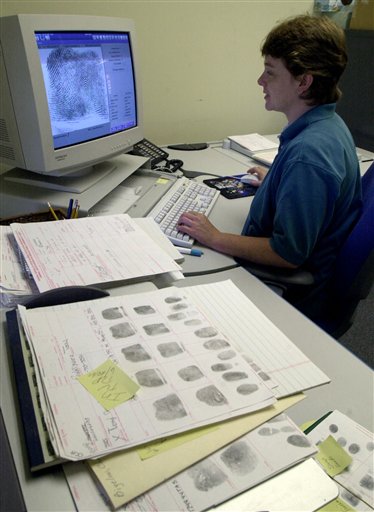 In Department of Justice v. Reporters Committee for Freedom of the Press (1989) interpreted the privacy exemptions on Freedom of Information Act requests. The Court has said that the press does not have special access to crime records that are not available to the general public. While the CBS news correspondent who requested rap sheets on a Pennsylvania man could have gotten arrest information at local courthouses, the Court ruled that he could not access the centralized data from the Pennsylvania Crime Commission. In this file photo, a criminal records specialist in Vermont works on fingerprint analysis at the state’s crime lab. (AP Photo/Toby Talbot, used with permission from the Associated Press)

In DOJ v. Reporters Comm. for Free Press, 389 U.S. 749 (1989), the Supreme Court rejected a request by a CBS News correspondent and the Reporters Committee for Freedom of the Press under the Freedom of Information Act (FOIA).

They had asked the Federal Bureau of Investigation (FBI) to produce the rap sheet for Charles Medico, whom the Pennsylvania Crime Commission had identified as a member of a private business that was dominated by crime figures.

Such rap sheets, which have been collected on some 24 million people under the age of 80, contain the history of arrests, charges, and dates that individuals have been incarcerated, and are shared with other law enforcement agencies to detect and prosecute criminals. They sometimes contain inaccurate information.

Congress had provided for the cancellation of rap-sheet information to agencies that shared them with others, although it did permit their release for certain limited purposes. These included information on individuals connected to federally chartered or insured banking institutions, self-regulatory industries in the securities industry, or applicants before the Nuclear Regulatory Commission.

The FOIA, however, exempted certain documents from public disclosure, including law enforcement records that “could reasonably be expected to constitute an unwarranted invasion of personal privacy.”

The U.S. district court that reviewed this case had issued a summary judgment against the request largely on statutory grounds and on the basis that the disclosure of such information constituted an unwarranted invasion of privacy.

By contrast, the D.C. Appellate Court had reversed on the basis that an individual’s interest in suppressing criminal information that was otherwise available in public records was minimal.

Judge Kenneth Starr had written a dissent in that case in which he argued that Congress had evidenced clear intent to protect individuals against such governmental computer databases, and that the only exception should be for public figures.

In a decision written by Justice John Paul Stevens and joined by six other members, the Court majority overruled the appellate court, relying chiefly on the need to protect individual privacy. Noting how carefully Congress had limited such information on a number of occasions, it believed that individual privacy interests were substantial.

It relied in part on prior decisions in Whalen v. Roe (1977), limiting the dissemination about stored information on drug prescriptions, and Department of Air Force v. Rose (1976), redacting names in information related to Air Force Academy Honor and Ethics Code violations.

First Amendment does not provide press special access to information

Stevens further rejected pleas that the Court should engage in ad hoc balancing of rights in each individual case. He did not think that the identity of the requesting parties was relevant but thought that Congress could enact a blanket prohibition on the disclosure of information about private individuals that did not otherwise shed light on the performance of the agency that possessed the information.

Arguing for the advantage of “bright-line rules,” Stevens said that “we hold as a categorical matter that a third party’s request for law enforcement records or information about a private citizen can reasonably be expected to invade that citizen’s privacy, and that, when the request seeks no ‘official information’ about a Government agency, but merely records that the Government happens to be storing, the invasion of privacy is ‘unwarranted.’ ”

Justice Harry Blackmun wrote a brief concurring opinion in which Justice William Brennan concurred.  Blackmun was reluctant to endorse “categorical,” rather than individualized, balancing. He thought that there might be situations — he mentioned a congressional candidate who had been convicted for tax fraud — where it might be appropriate to disclose rap-sheet information.

The case is consistent with other cases that denied that the First Amendment provided the press special access to information that was not otherwise available to the general public.