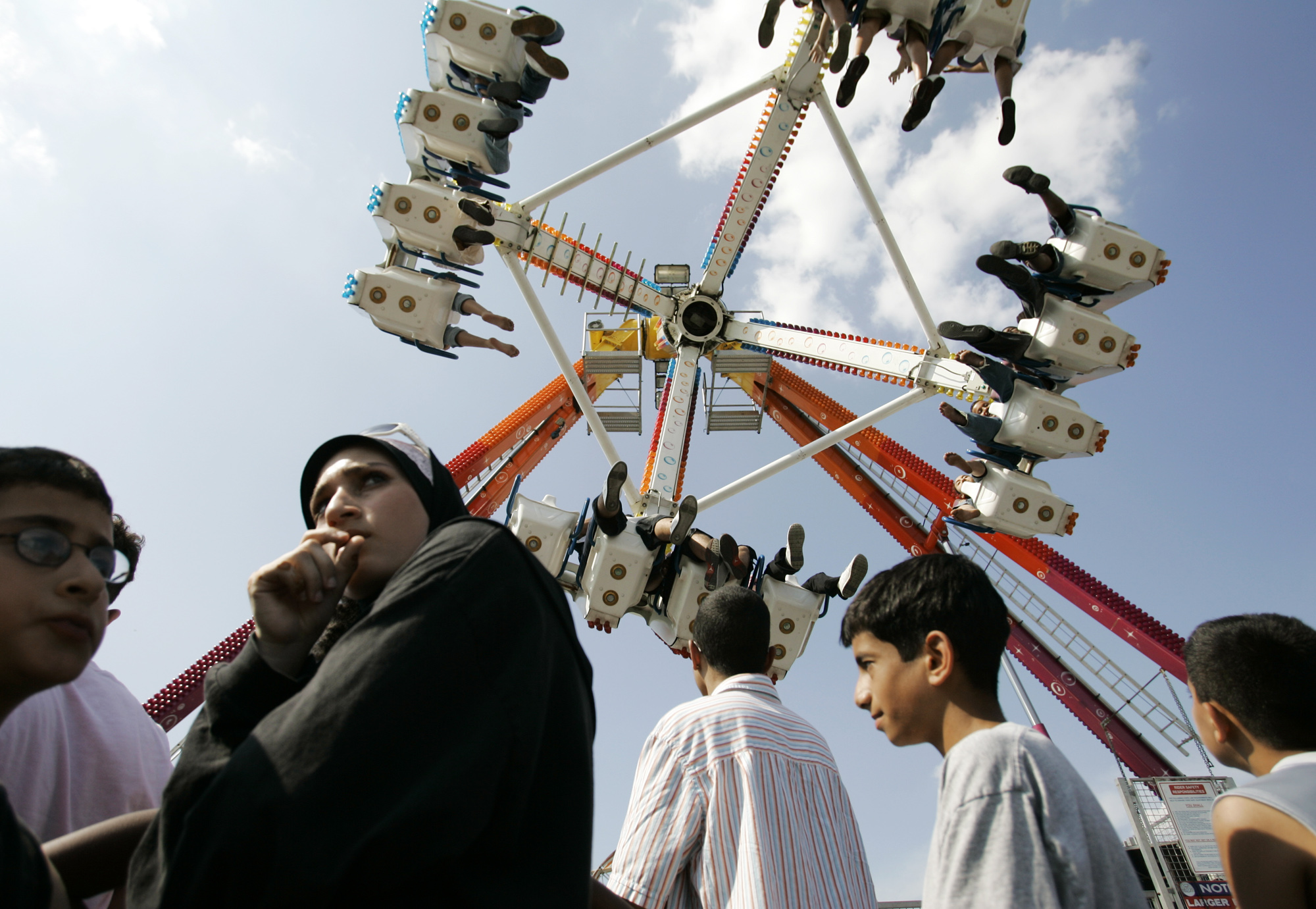 In this Sunday, June 17, 2007 file photo, people wait in line as a ride spins overhead at the 12th annual Arab International Festival in Dearborn, Mich. Members of a group called "Bible Believers" attended the festival in 2012, wearing provocative shirts with messages many Muslims might find offensive and were pelted with water bottles. Police escorted them out and they sued in federal court alleging a violation of their free speech and free-exercise rights. (AP Photo/Paul Sancya, used with permission from the Associated Press)

In Bible Believers v. Wayne County, 805 F.3d 228, (6th Cir. 2015), a divided en banc (full panel) 6th U.S. Circuit Court of Appeals ruled that Wayne County, Michigan, officials violated the First Amendment rights of a self-described Christian evangelical group when they removed them from the Arab International Festival in Dearborn, to protect them from a hostile audience. The case stands for the principle that the First Amendment protects unpopular speech and that government officials should not sanction a heckler’s veto.

Bible Believers kicked out of festival after being allegedly assaulted

The Believers returned to the 2012 festival but demanded better police protection. They again wore very provocative shirts with messages such as “Islam Is a Religion of Blood and Murder” and “Only Jesus Christ Can Turn You From Sin and Hell.” Many members of the festival reacted by throwing bottles at the Believers. Another person punched the leader of the Believers in the face. The police escorted the Believers out of the festival.

In September 2012, the Bible Believers sued in federal court, alleging a violation of their First Amendment free-speech and free-exercise rights and the right to equal protection. A federal district court granted summary judgment to the government officials. The Bible Believers appealed to the 6th Circuit.

The 6th Circuit reversed and ruled in favor of the Bible Believers. Writing for the majority, Judge Eric Clay reasoned that the Wayne County Sheriff’s Office “effectuated a heckler’s veto by cutting off the Bible Believer’s protected speech in response to a hostile crowd’s reaction.” Clay explained that the First Amendment often protects offensive and unpopular speech, referencing the Nazis' speech in Nationalist Socialist Party of America v. Village of Skokie (1977) and the KKK's in Brandenburg v. Ohio (1969).

Judge Clay then reasoned that the Bible Believers’ speech did not cross the line into unprotected incitement to imminent lawless action or fighting words. “The hostile reaction of a crowd does not transform protected speech into incitement,” he wrote. Regarding fighting words, he noted that the vast majority of individuals attending the Festival did not react with violence toward the Believers.

Clay then explained that the Wayne County Sheriff’s Office allowed a heckler’s veto, which is inconsistent with the First Amendment. “The civil-rights era cases tell us that police cannot punish a peaceful speaker as an easy alternative to dealing with a lawless crowd that is offended by what the speaker has to say,” he wrote.

Judge Richard Griffin and Judge Jeffrey Sutton wrote opinions concurring in part and dissenting in part.   They agreed with much of Clay’s First Amendment analysis but would have granted the defendants qualified immunity.

The county filed a petition for writ of certiorari to the U.S. Supreme Court, but the Court denied review in May 2016.