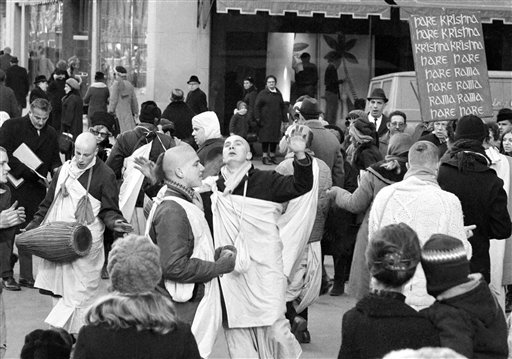 Members of the International Society for Krishna Consciousness (ISKCON), pictured here in 1970, have a ritual called sankirtan, which involves soliciting funds and distributing literature in public places. In 1988, metropolitan New York airports banned repetitive solicitation of funds or distribution of literature within airport terminals. ISKCON alleged that the regulation infringed upon their free speech rights. International Society for Krishna Consciousness v. Lee (1992) upheld parts of the ban and declared that airports are not public forums and are therefore not presumptively open for the exercise of speech rights. (AP Photo/Marty Lederhandler, used with permission from the Associated Press)

In International Society for Krishna Consciousness v. Lee, 505 U.S. 672 (1992), the Supreme Court held that a regulation prohibiting solicitation of funds in an airport was constitutional. The decision turned on the determination of whether an airport operated by a government agency is a public forum.

Since Hague v. Committee for Industrial Organization (1939), public places, such as streets, sidewalks, and parks, have been understood as public fora and therefore considered presumptively open for the exercise of speech rights. Speech regulations in these fora are permissible only if they are narrowly tailored to serve a compelling state interest. Not all public places, however, are public fora. The standard of scrutiny for regulation of speech in a public place depends partly on the Court’s classification of the forum.

Members of the International Society for Krishna Consciousness (ISKCON), a nonprofit religious corporation, perform a ritual called sankirtan, which involves soliciting funds and distributing literature in public places. In 1988 the New York Port Authority, a government agency that owns and operates the three airports in metropolitan New York, adopted a regulation forbidding repetitive solicitation of funds or distribution of literature within airport terminals.

ISKCON filed suit, alleging that the regulation violated its speech rights. A district court agreed, but a circuit court was willing to uphold bans on solicitation but not on the distribution of literature. The ISKCON thus appealed one part of the ruling (at issue here) while Lee, the superintendent of the Port Authority, appealed another in the companion case Lee v. International Society for Krishna Consciousness.

Chief Justice William H. Rehnquist, writing for the majority, agreed with the circuit court in arguing that airports are not “traditional public fora,” because they have not typically been used for speech, and are not “designated public fora,” because the regulations show that airport authorities oppose speech there. Thus, he concluded that airports are nonpublic fora, and regulations of speech there must only be reasonable and content-neutral. The Port Authority’s regulations of solicitation were reasonable, he said, because the terminal’s function — transportation — can be disrupted by such solicitation causing congestion, time delays, and the risk of fraud.

Justices differed on which parts of the ban were constitutional

Justice Sandra Day O’Connor, in a concurrence that applied to this case and Lee v. International Society for Krishna Consciousness (1992), agreed that airports are nonpublic fora and that regulations must only be reasonable. She also found, however, that although the ban on solicitation was reasonable, the ban on leafleting was not, because accepting a leaflet does not force a person to stop walking and does not create the risk of fraud.

In another concurring opinion, Justice Anthony M. Kennedy argued that the majority’s forum analysis was flawed.The inquiry into the nature of a forum, he said, must be based on an objective analysis of its physical characteristics, not on government claims. Airport terminals, he said, are similar to sidewalks and streets, and they are one of the few spaces left for people to engage in expressive activity. Thus, Kennedy argued, airports are public fora, so speech regulations must be given strict scrutiny. He found that the ban on solicitation was permissible, but the ban on distributing literature was not.

Justice David H. Souter, in dissent, argued that airports are public fora and that neither ban was permissible. He noted that no evidence of fraud existed and that banning solicitation did not leave open ample alternative channels of communication.

In sum, in this case and in Lee v. International Society for Krishna Consciousness, five justices agreed that airports were not public fora; six found that the ban on solicitation of funds was constitutional; and five held that the ban on the distribution of literature was unconstitutional.

This article was originally published in 2009. Katrina Hoch was a doctoral student at the University of California San Diego.