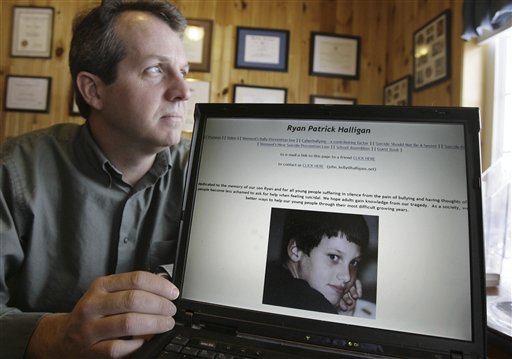 John Halligan shows the Web page devoted to his son, Ryan, at his home in Underhill, Vermont, Feb. 7, 2007. Ryan Patrick Halligan, bullied by classmates for months online, killed himself in 2003. States from Oregon to Rhode Island are considering crackdowns to curb or outlaw the behavior in which kids taunt or insult peers on social Web sites like MySpace or via instant messages. However, cyberbullying presents First Amendment issues because the statutes often criminalize speech and some of the language in certain laws and regulations arguably is overly broad or vague.(AP Photo/Toby Talbot, used with permission from the Associated Press)

Cyberbullying, sometimes called cyber-harassment, is bullying or harassing committed by electronic means.  Cyberbullying has become a major issue in schools, as well as society at large, particularly after several high-profile incidents where kids who were bullied online committed suicide. The White House called a summit on the phenomenon in 2011.

Cyberbullying presents First Amendment issues because the statutes often criminalize speech and some of the language in certain laws and regulations arguably is overly broad or vague.  For example, the New York Court of Appeals invalidated Albany County’s cyberbullying law as overbroad in People v. Marquan M.  The defendant, a high school student, posted sexually explicit pictures of classmates on the Internet.

Prosecutors charged him with violating Albany County’s law, which read:

"any act of communicating or causing a communication to be sent by mechanical or electronic means, including posting statements on the internet or through a computer or email network, disseminating embarrassing or sexually explicit photographs; disseminating private, personal, false or sexual information, or sending hate mail, with no legitimate private, personal, or public purpose, with the intent to harass, annoy, threaten, abuse, taunt, intimidate, torment, humiliate, or otherwise inflict significant emotional harm on another person."

The New York Court of Appeals reasoned that the law was too broad, because it “embraces a wide array of applications that prohibit types of protected speech far beyond the cyberbullying of children.”

The North Carolina Supreme Court invalidated its state cyberbullying law in State v. Bishop (2016).   This case also involved a high school student who posted negative comments about a classmate under a sexually explicit photo.  The state law prohibited the use of a computer to “post or encourage others to post on the internet private, personal or sexual information pertaining to minors” with the intent to intimidate or torment a minor.

The state high court explained that the law failed to require that the subject of an online post suffer injury from the online tormenting and, thus, the law “sweeps far beyond the state’s legitimate interest in protecting the psychological health of minors.” The state court also noted the failure of the state legislature to define the key terms “intimidate” or “torment.”  Thus, the law could be applied to merely annoying speech protected by the First Amendment.

However, the Third U.S. Circuit Court of Appeals has ruled in a couple of decisions that school officials lack the authority to discipline students purely for off-campus, online speech.  In one of those decisions, Layshock v. Hermitage School District (3rd Cir. 2011), the Third Circuit wrote that “it would be a dangerous and unseemly precedent to allow the state, in the guise of school authorities, to reach into a child’s home and control his/her actions there to the same extent that it can control that child when he/she participates in school sponsored activities.”

However, most other circuits apply the familiar “substantial disruption” standard from Tinker v. Des Moines Independent Community School District (1969).   Most courts have applied the Tinker’s reasonable forecast of substantial disruption standard even to off-campus, online speech so long as there is a reasonable connection or nexus to school activities.

There is another part of the Tinker test that is often forgotten.  In Tinker, the Court intimated that school officials could punish students if their speech invaded the rights of other students.  Cyberbullying expert James C. Hanks explains in his book School Bullying: How Long Is the Arm of the Law that this part of the Tinker case could provide the legal justification for cyberbullying laws.