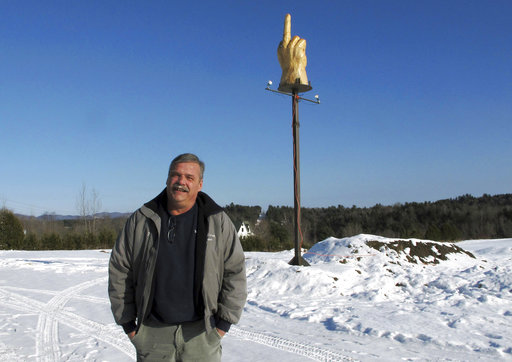 Ted Pelkey stands in front of a wooden sculpture on his front lawn on Thursday, Dec. 13, 2018, in Westford, Vt. Pelkey, who is in an ongoing dispute with the town over plans to move his truck repair and recycling business to his property, paid to have the sculpture created to send a message to the town. The middle finger gesture goes back to Greek and Roman times and is often referred to as giving the finger, or the flipping the bird.  Experts do not believe the gesture meets the legal standard of obscenity or that it constitutes a form of “fighting words,” at least not unconnected to other actions and words specifically designed to provoke violence.(AP Photo/Lisa Rathke. Used with permission from The Associated Press.)

An article in the February 3, 2018 issue of USA TODAY indicated that Mark May of Terre Haute, Indiana was seeking unspecified damages after being ticketed for provocation after showing his middle finger to a police officer, Matt Ames who had cut him off in traffic after pursuing another driver.  Others have been ticketed for disorderly conduct or under breach-of-the-peace statutes for the same gesture.

The gesture, akin to directing the F-word toward another person, goes back to Greek and Roman times and is often referred to as giving the finger, or the flipping the bird.  Professor Ira P. Robbins has written an extensive article on the subject in which he concluded that while the expression is vulgar, it does not mean that it is illegal.  Specifically, he does not believe the gesture either meets the legal standard of obscenity as outlined in the U.S. Supreme Court’s decision in Miller v. California (1973), nor that it constitutes a form of “fighting words,” outlined in Chaplinsky v. New Hampshire (1942), at least not unconnected to other actions and words specifically designed to provoke violence.

Although Robbins finds that courts have been split as to whether the gesture, when directed toward police officers, can be punished (decisions sometimes depend on whether the statutes under which charges are brought are considered to be overly broad), he believes that police should generally be expected to tolerate such abuse without responding instinctively.

Case law involving school students is somewhat more restrictive than that governing adults.  Thus in Tinker v. Des Moines Independent School District (1969), the Court upheld the rights of students to wear black arm bands in protest to the Vietnam War while in Bethel School District No. 403 v. Fraser (1986) it permitted punishment of a student who delivered a speech that could be considered vulgar, offensive, or lewd.

Based on such precedents, Robbins believes that schools should be able to suspend or punish students who make such gestures in school where they could disrupt the learning process or interfere with the educational mission, but not outside school premises.  He also thinks that courts should be able to use their powers of contempt to punish individuals who used such gestures in court against a judge or other judicial officer.

Robbins also noted that, in part because of the ambiguity of Federal Communications Commission regulations, reflected in part in FCC v. Pacifica Foundation (1978), which permitted punishment for the airing of seven dirty words, broadcasters often chose to censor the gesture rather than face possible punishment.